On Friday morning, I had a vision for a sketch for my spiritual/visual journaling, so I quickly committed it to paper: 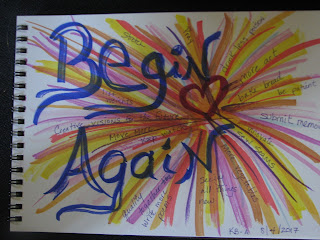 Friday was a fairly quiet day at work--thankfully!  I had been awakened by the alarm company calling, and I wasn't in a high energy mood.  But luckily, no crises emerged that required me to be firing on more cylinders than I had.  Friday night I crashed into sleep sooner than I expected; I don't think I even made it to 6:30 a.m.

I woke up early, around 2, and put together a manuscript of the inspiration e-mail project posts that I've been creating for several years.  I saw this call for manuscripts at Pleiades Press, and I thought I might submit.  I still can't decide, but I knew the first step was to assemble what I had and then to determine if I thought it was poetry.  Stay tuned!

Sunday was the most productive day in terms of creativity.  I went to JoAnn Fabrics to pick up some autumnal lights (like Christmas lights, only in orange, yellow and brown).  I saw a wreath frame and it was relatively cheap, and then discounted 40%, so it cost less than $5.  I thought about the autumnal elements that I already have:  ribbons in 3 colors and fake gourds.

Even though I'm not going to hang the wreath on our porch until September, I wanted to assemble it while I was inspired.  And so, yesterday afternoon, I did.  I wrapped the ribbons around the form, and my spouse got two types of pliers so that we could string thread through the fake gourds to make loops so we could hang them.  Here's a close up: 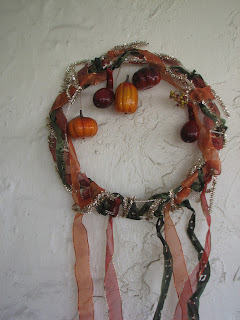 And here's the longer view, with a coconut on the table: 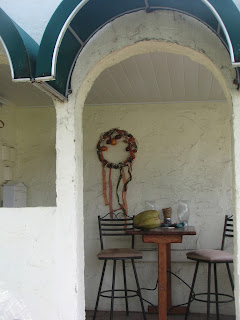 In my sorting of the past month, I came across a broken candle holder made of pretty glass that my spouse had kept, and we promptly forgot about.  I thought it might make an interesting candle base, with reflective qualities.  I found some rocks that I had saved for some reason, and I thought they make an interesting combination: 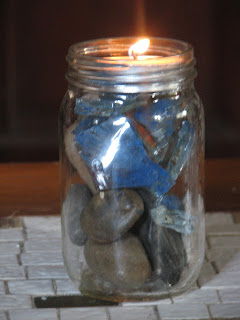 As we've burned the candle, the wax has started melting down the inside, despite the fact that I'm using a tea light candle, so I'm not sure how this construction will look in the future.

This morning my spouse got up early, as he's got a report due today.  So, it was another day of waking up at 2:00.  But in a way, it was fine.  I read The Well Speaks of Its Own Poison,a collection of poems by Maggie Smith, and then I wrote 2 poems, plus I have ideas for more.

So, it's been a good week-end with a variety of creative activities.  Did I get the weeding done?  No.  Have I done all my grading?  No.  But I feel ready for the week, in a way that I wouldn't have, if I hadn't fed my soul in this way.
Posted by Kristin Berkey-Abbott at 5:27 AM