Those of you who have done home repair/restoration/renovation may recognize this syndrome:  you plod along, or worse, you take 2 steps forward and something happens and you're back five steps--but then the day comes when you see the progress.  You may not be done, but you feel closer to that point.

This process perhaps describes more of my life than I like to think.  Hmmm.

Yesterday was one of the days of the "Wow, progress!" response.  How I wish I had more of those, but let me savor yesterday.

A year ago, Hurricane Irma destroyed our fence.  Actually, Hurricane Irma completed what the garbage truck workers had begun; in any case, after the hurricane, it became clear that we would need to replace the fence sooner rather than later.

Easier said than done.  My spouse knew what kind of fence he wanted, researched the fence companies who said they could install it, and waited for the estimates/proposals.  This process took several months.  As with so many housing decisions, we went with the company who returned our phone calls.

At the end of August, we had much of the fence installed, but with some problems, like a huge gap in the front, where the gate meets the post.  The problems were fixed, and we waited for the final inspection.

Last week, the fence failed the final inspection.  I was so exhausted that I just shrugged.  The fence company came out to do the adjustments.  The city inspector was going to come on Thursday, but then the appointment was moved to Monday.

And yesterday, sweet success!  The fence has passed the final inspection.  Onward to other projects!

Last night I made this Facebook post:  Some women have men who bring them flowers. Some women have men who wrestle the kitchen countertop and huge cabinet into the backyard all by themselves so that the women don't return home from work to have to help with this last step of getting the space ready for phase 2 of the Great Flooring Project. I am that lucky woman #2!

Here's a picture of what he moved, all by himself: 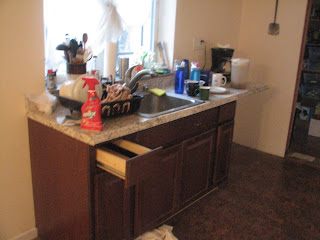 Here's a picture of the space where eventually, a remodeled kitchen will be: 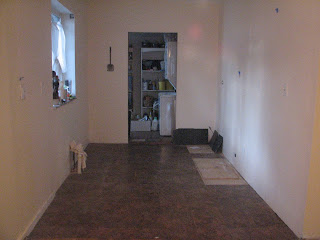 Will it all be done by Christmas?  Is that too much to expect?  We should have all of the floors done by the end of September.  But we haven't ordered the cabinets or the countertop yet--if those items go into back order . . . but let me not think about that now.  Let me rejoice in the completion of the fence.
Posted by Kristin Berkey-Abbott at 5:13 AM