This morning, I wrote a poem--and with that poem, I've written a poem every day in November.  I'm not sure I've ever been successful at writing a poem a day for a month.  There have been several Aprils that I have tried.

I've also been very active in my online journaling course which started Nov. 4, and in addition to writing a poem a day, I've done at least one sketch a day.  I've been interested in how they feed each other.

The blogging feeds the work too.  Here's an example.

On Sunday, in this post, I wrote, "At the eastern continental divide, the landscape took on a different sort of beauty than I see regularly. The trees were coated with ice and snow, but the roads were only wet with rain. My spouse was driving, so I could marvel in the wintry wonderland mixed with final autumn colors. The sky looked like the clouds had come to down to lend the trees some additional ghostly sparkle. Some of the trees still had their autumn leaves. Some of the trees were frosted, while others had been sheltered from the wintry mix. It was beautiful. Alas, my camera was packed away."

On Wednesday, I made this sketch: 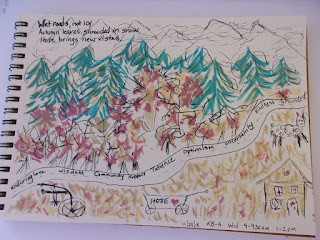 As I was sketching, which took place in two parts of the day as I was subbing for a Speech class, the haiku-esque creation that's on the sketch began to form.  And this morning, I tried to use some of the images in a longer poem.

My online journaling class lasts for 3 more weeks, and I plan to keep sketching once a day.  I also plan to keep writing a poem a day.  It's such a nourishing, refreshing practice.
Posted by Kristin Berkey-Abbott at 5:44 AM