Quilt Camp Comes to an End

It's been fascinating to spend half a week with quilters.  We were 9 women, all middle age or older, plus one teenager who was doing remote schooling while we quilted.  I was the only one who quilted by hand, but that was cool--I'm used to being in a minority of people who stitch by hand.

I've been amazed as I've been quilting how many people reached out to me to remind me that I made a quilt for them.  I wish I had done a better job of documenting all the quilts I've made.

But in a way, the quilts I've kept have been a different sort of documentation.  The one that I've been working on is made up of fabrics left over from this quilt: 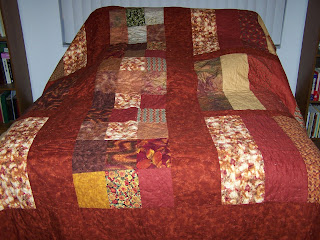 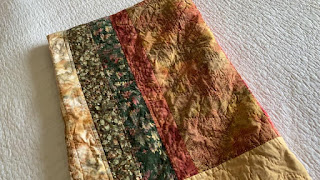 I spent years collecting autumnal fabrics (along with all sorts of other fabrics).  The quilt that I  just finished marks the end point of that collecting: 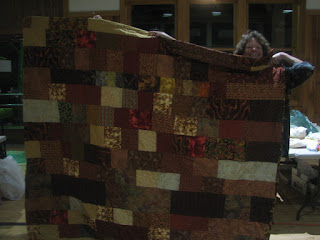 As I was working on the quilt, at times it felt like visiting an old friend.  I remembered the quilt shop where I'd bought this piece or that one, the quilt show where I got the exquisite coppery swatch named "Fairy Frost," the set of fat quarters that I kept while waiting for just the right project, the times I felt flush with cash when I bought fabric, and the times when I felt like I could only afford a yard or two of fabric and so I chose carefully.

Some of the pieces were unfamiliar: 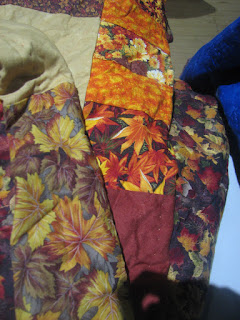 But as I worked, I started to remember.  Once I went to a fabric store at the far northwestern end of the county; it had the most amazing collection of fabrics, many of which were unlike any that I'd ever seen, most of which I could barely afford.

I finished my big quilt on Friday, which I didn't expect.  I had hoped to quilt the middle of the quilt, the part that's hard to do without a big table.  I did that and kept going.  I finished all the quilting and started on the edges, and then I decided that I wanted to be done by the evening show and tell.  And so, I did.

Yesterday I decided to start on my other project.  I almost didn't bring my bag of fabrics because I didn't think there was any chance I'd have time to work on the baby quilt that I want to make for my neighbor's son who is expecting a child in the next few weeks. 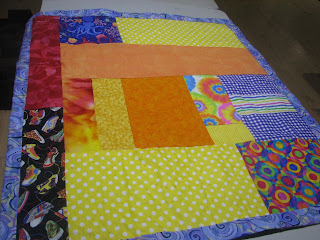 I'm glad that I did bring it, because I was able both to start and finish it yesterday, since I had bought the backing fabric on Thursday: 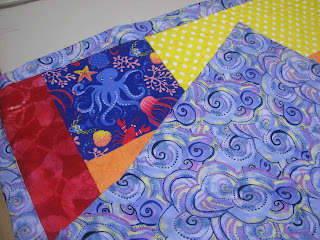 It's been a great quilt retreat.  I expected it to be wonderful, and it was even better than I expected.  I'm so glad that I made the effort to get here.  Hopefully it won't be the last.

Posted by Kristin Berkey-Abbott at 5:55 AM

So glad you went - it seems like a wonderful, creative time - with visiting dear friends a bonus! Mom