A Sunday Walk to the African American Cemetery 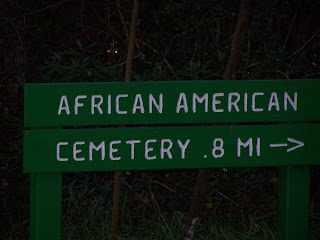 On Sunday morning, my friend invited me to walk with her to the African American cemetery that's on the grounds of Mepkin Abbey.  We had plenty of time before the Eucharist service, so I said yes.  In all my years of coming to Mepkin, I've never walked to the cemetery.  One year, I started out, but seeing this duck blind early on the hike made me change my mind: 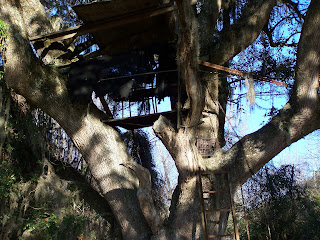 It's much more rickety than it once was--hard to imagine anyone sitting up there and shooting animals.  Plus, we heard less distant shooting during our February trip than we do in November.

We walked through full cotton fields. 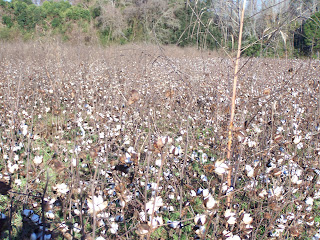 At one point, my friend twirled around and said, "I have never been in the middle of a cotton field!"

I have vague memories of taking a field trip during my elementary school years in Montgomery, Alabama.  We were encouraged to pick a cotton ball and to see how difficult it is to separate the seeds from the cotton, which once made the cotton industry prohibitively expensive, when the separation had to be done by hand--slave's hands.

Enter Eli Whitney and the cotton gin.  As my friend put it:  "One man's wealth is another's misery."

If I put this scene in a work of fiction, it would strain your credulity.  My friend is African American; she grew up in Atlantic City, NJ, but her family had migrated there from the South.  I'm a white woman who spent all of my middle class childhood in various Southern states in the post-Civil-Rights era.
Finally, we got to the cemetery. 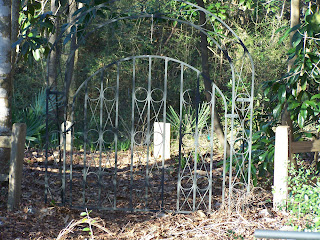 We had thought it was a slave cemetery, but the dates didn't match slave years.  My friend, who has a Ph.D. in American Studies, pointed out that slaves were buried in unmarked graves.  For the most part, slave owners would not have spent money on headstones.  And of course, slave families had no money of their own. 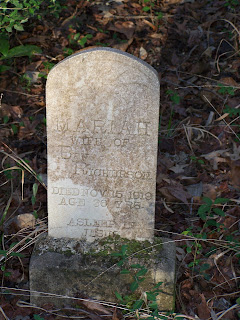 Several of the gravestones had things draped over them:  beads, a string of shells, a crucifix on a ribbon.  We wondered if the monks did that.  My friend assumes that the surrounding African-American community takes on this responsibility.  She speculated that there's some African or Gullah custom represented with this kind of offering. 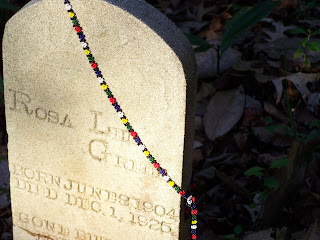 ﻿The cemetery was smaller than I expected.  We didn't wander very deep into it--maybe there were more graves back further.

I thought of all the ways we are implicit in all the world's brokenness.  And then I went to the Eucharist service to be reminded of all the ways that God breaks into our brokenness.  I prayed for redemption of all sorts.  And I said a prayer of thanks for my own good forutne to be born into the circumstances that kept me safe from unsavory practices--and for the poem ideas swirling in my head.
Posted by Kristin Berkey-Abbott at 5:35 AM