Ten years ago, it had just started to rain.  Hurricane Katrina was in the area.

We weren't expecting much.  Katrina hadn't been a hurricane for very long, and we expected a category 1 hurricane, which we had weathered successfully before, sometimes without even losing power.  We always keep a stocked pantry, and I usually fill up containers with water as the storm gets close.

I know that we didn't shutter the windows, because all day I watched the rain as I worked on a writing project in the back office.  From that vantage point, I had a view of the giant ficus tree.  Here's a picture of what the yard looked like much later. 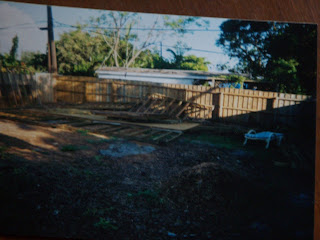 The tree, which may have once been several trees, stretched along the whole back fence and arched over the back yard, shading half the yard.

As the afternoon of rain progressed, I noticed the branches of the ficus bending lower and lower.  I wondered if we should worry, but what could we do?  We'd had a few inches of rain, and we had weathered rain events that dumped 10 inches on us in the course of an hour.

I have spent time wondering what caused the ficus tree to fall over.  Was the ground so wet after a summer in the rainy season that it couldn't hold the tree up?  Was it the steady rain over a whole day?  Was it that my spouse had spent time trying to chop down the tree himself through the summer so that the tree no longer had the support system it once had?

The back corner of the yard once held a small shed.  After the tree fell over, here's the top of the shed, now squished to the ground: 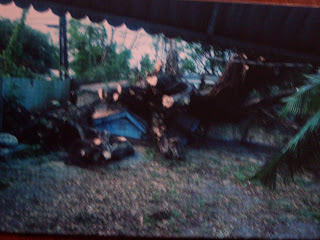 We spent the next 6 weeks cleaning up, carrying brush to the curb, carrying the garbage that had once been the contents of the shed to the curb. 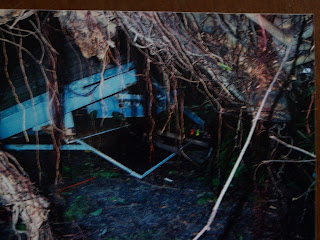 We were lucky that we could salvage some of the things that had been in the shed, including the chain saw. 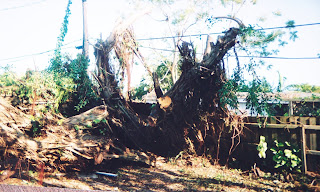 In the faded picture below, the figure in faded red is my spouse.  He's standing on the ground with the wreckage of the tree above him. 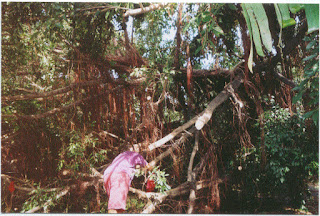 It's been 10 years since the very bad hurricane season of 2005, and much of the damage is no longer visible.  I think about the businesses that have closed, and the people who moved.  I think of our much higher insurance rates.

I no longer take any storm lightly.  I'm keeping a wary eye on Hurricane Danny, which seems to be falling apart, but history shows us that it doesn't take much time for a storm to gather itself back together.  We now live in an area much more prone to floods, and we have our sandbags ready.

I've been counting on El Nino to shear apart our storms.  It's good to remember that Hurricane Andrew formed in an El Nino year and wiped out Homestead, Florida--twenty-three years ago tomorrow.
Posted by Kristin Berkey-Abbott at 7:33 AM