A Mission to Find the Mission

Yesterday, I still had some time to explore San Antonio, especially after discovering that the AWP sessions I wanted to attend had been canceled.  I wanted to see the old missions, which my mom had told me were interesting.  On a map, it looked like I could walk to the one that was closest to downtown--so in the early afternoon, off I went.

I started off walking down South St. Mary's, a street that would take me through an arts district.  I did see some artsy stuff, but mainly restaurants and a house that said, "Metalworking" on a sign, but no actual metalsmith or goods in sight.  I walked and walked, heading south, through neighborhoods that got shabbier, with one woman who asked me for 50 cents for the bus and a man who was too drunk to ask for anything.

And yes, there were many moments when I wondered if I was risking my safety, although most blocks were fairly deserted. 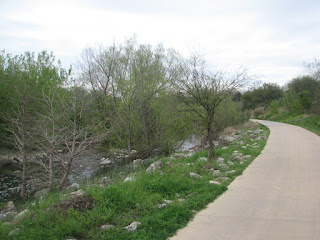 Off I went, under Interstate 10 and other major highways.  I've now been on either side of I 10 (in Florida and in California) and now stood underneath the middle.  I walked by sports fields and people fishing and a funeral procession later on, as I hiked through city streets to get to the mission: 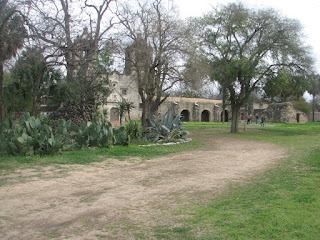 And finally, I arrived: 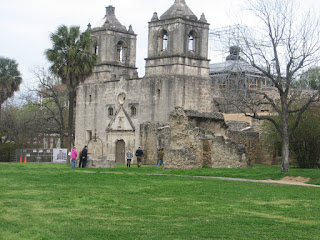 The main church was closed for construction, which I knew would be the case.  So I looked around a bit, took some pictures, and explored the grounds.  I found a small shrine to the edge, which was cool: 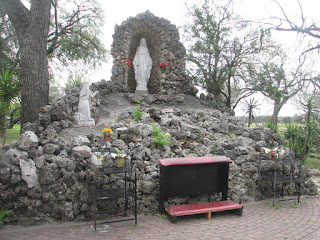 And then, I hiked back. 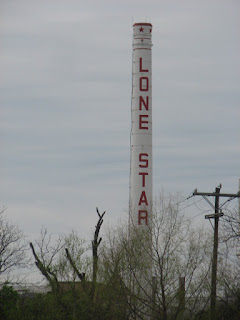 I had thought I might have a beer at the Lone Star Brewery on my way back, but it was closed--closed as in offered up as a potential development site. 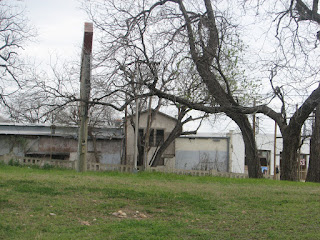 After I got back, my friend and I went to a nearby pizza place, Dough, where I did have a beer.  It wasn't a Lone Star beer, but it was a local porter, and it was cold and delicious.

In a few hours, I'll get on the plane and head back to Florida, home of similar missions, much of which have been obliterated by the pace of development.  I've enjoyed the time to get to a different part of the country, explore a different history.  I look forward to seeing what poems and other creative stuff might emerge.
Posted by Kristin Berkey-Abbott at 9:37 AM