The First Full Day of the 2022 Onground Intensive

As I moved through the first full day of the onground intensive, the one that will leave me a certified spiritual director, I had to remind myself several times that it's called an "intensive," not a restful retreat, not a reconnect with every old friend you've ever had week, not an explore Columbia voyage.  We went at an intense pace yesterday, and today we won't have the afternoon break that we had yesterday.  But I am looking forward to exploring icons in a Greek Orthodox church this afternoon, so hopefully, we won't need a break.
During yesterday's break, we went to the Fresh Market to buy wine and treats.  By the end of the evening, we were too exhausted to set out the treats.  But it was the good kind of exhaustion, the kind that comes from being fully engaged.
I began the intensive in the chapel.  I had volunteered to help with the morning service, and I wrote some Epiphany prayers (for more, go to this blog post and scroll to the end).  The other volunteer whispered, "Beautiful prayers" when I was finished, and that made me so happy.
The day was filled with a mix of educational sessions and small group work.  I've had the same small group for 2 years, and I feel fortunate that I like them so much.  This program would be impossible if one didn't like one's small group, or if a small group had a divisive person in it.
Yesterday's educational sessions addressed the history of spiritual direction in the Roman Catholic and Anglican/Episcopalian traditions (morning session), and in the afternoon, we explored the history of spiritual direction in the Protestant tradition.  They were good sessions, very informative, almost overwhelming at times.  I didn't know about John Wesley's mother Susannah, who had 10 children who lived and who ran the family home like a monastery of sorts, thus giving John Wesley some of his most inspired ideas about how to live in Christian community.  I must remember to read more about this remarkable woman.
Along the way, I made this sketch, and a haiku to go along with it: 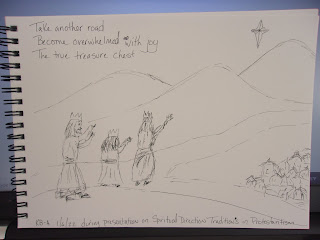 I created it after hearing/reading the second chapter of the Gospel of Matthew several times throughout the day and a session of lectio divina; here are the words to the haiku:
Take another road
Become overwhelmed with joy
The true treasure chest
In the evening, after a wonderful dinner, we heard from Axiom Farms, the ones who prepared our meal.  They have all sorts of initiatives to reach out to underserved, minority populations, to bring them healthier food and information about how to grow one's food and most importantly, to inspire people to have hope.  They have created a garden on the grounds of the seminary.  There's plenty of room--the seminary sits back from the road, and between the buildings and the road is a huge expanse of lawn.  The partnership with the seminary made me want to change all my plans--and do what, exactly?  Come to this seminary?  Buy a plot of land and farm it?  Give them money to support their work?  Yes, to all of those.  I'm not likely to act on any of them, at least not this month, but it was good to feel that hope for the future myself, even if I'm not the target audience for Axiom Farms.
We adjourned to the courtyard for our evening worship.  There's a Native American group that we'll learn more about today who came last night.  They had a smudging ceremony in the courtyard.  We each stepped forward to be smudged with sage that smoked in what looked like a giant shell.  The elders swirled the smoke around us with big feathers.
I wish I could have heard better.  At first I thought the same words were repeated with everyone, but as I watched, I realized that wasn't true.  I was second to be smudged.  The female elder of the tribe said, "Oh, such strong shoulders" as she touched them with the feather.  She said, "And a good heart."  I'm not sure of the rest, although at one point, she did say, "We're getting rid of all negativity."
Later she told me that there are 4 types of smudging smoke:  tobacco, sage, sweetgrass, and cedar.  I wonder if those smudging ceremonies are different.
The one we experienced last night was very powerful.  Many of us cried a bit, and a few of us were deeply shaken, and I'm not sure whether it was in a good way or a bad way.  Once again, I was reminded of how cerebral most of our mainline Protestant worship services are, and how it might be much more powerful/effective to do more embodied practices.
We then went into Alumni Hall for a drum circle, which is different from many drum circles.  There was a big, round drum in the center of the room with 6 people around it.  Their drum sticks looked like they had big cotton swabs on the end.  Around this drum circle, we sat in chairs that were much too close to each other, but this room is the largest on campus.
It was interesting to be in a room of Native Americans, after hearing from African Americans, all of whom were trying to reclaim cultures and practices that can heal both people and land.
We learned that some hymns, like "Spirit of the Living God" and "Amazing Grace," can be sung to Native melodies played on the Native wind instrument which I think is called a flute but looks more like a recorder.  We learned some Native phrases so that we could sing refrains to other songs and chants.  For one song, two women did a bit of a dance between the drum circle and our seated circle.  It was a meaningful experience, but nothing can compare to the smudging ceremony.
It makes me want to create/recover similar ceremonies that draw from Protestant traditions.  I'm aware of the dangers of appropriating the culture of others, but I'm also certain that Christian communities have done something similar with incense and thuribles, so I don't think I'd be in the dangers appropriation territory.
I am ready to see what today brings.  I am so glad that I decided to attend in person.  In fact, knowing that we would experience the Native American version of Christian worship and that we would be going to a Greek Orthodox church to see icons in their home setting--those were two main reasons that convinced me that in person would be better for me than remote.
And if anyone asks if these experiences would be worth it, even if I get sick, I would say that yes, barring long COVID, it has been worth it.
Posted by Kristin Berkey-Abbott at 7:41 AM