Scenes from a Saturday

--I was with a group of friends yesterday, and we played the Righteous Gentile game described by Nathan Englander:  in the event of Holocaust, who would hide me and who would turn me in?

--Of course, "What We Talk About When We Talk About Anne Frank" warns us of what can happen when a group casually plays this game.  Happily, my group of friends remains on speaking terms.  I think.

--We did generate intense conversation.  We did remind each other of how other groups, most specifically groups which help abused women escape, have managed to hide endangered humans and stay safe.

--I posed the question this way, "Let's say the government decides to exterminate Lutherans.  Would you hide me?"  Posed that way, the question is almost humorous, especially since Lutherans are probably one of the least dangerous religious groups in the U.S.  We tried to remind each other that even though the government has yet to set its sights on Lutherans, other groups, like immigrants both legal and illegal, are often not so lucky.

--I am aware of the school of theology that says if we were living truly Christian lives, we would be on a direct collision course with our government.  To say that Lutherans are the least dangerous Christian group probably means we should be stepping up our efforts as Christians.

--I came home to watch the movie Beginners.  Christopher Plummer won an Academy Award for this movie?  I don't usually think about quitting a movie once it's started, but I was sorely tempted last night.  Was I offended?  No.  Just bored.  What a slow-paced movie.  What a dull-witted main character.  It would have been better to focus only on the Christopher Plummer character, the older father of the main character.

--The advantage to a boring movie is that one gets other things done.  I paid some bills and worked on my rock project.

--I'm in the process of creating a prayer chapel (see this post for more details).  My spouse and I have been creating rocks for the prayer chapel, rocks with words we've printed on them: 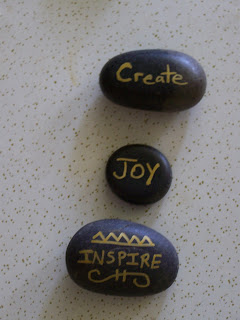 I really enjoyed creating them.  I have a vision of continuing to create them and leaving them in places.  It's a quiet form of performance art. 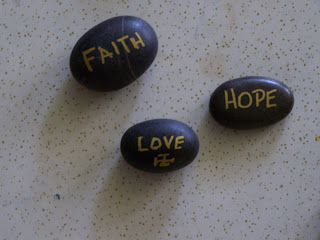 Posted by Kristin Berkey-Abbott at 7:05 AM