Spirituals: "A Wrinkle in Time" in Song

Last week was a tough week at work:  layoffs were announced, and we're losing 15 faculty members, 3 in my department.  I spent the week-end reading A Wrinkle in Time, and I found it a solace in ways that I always have with its tale of an epic battle and a spunky heroine and a good ending.

I've wanted to carry the book with me, as a talisman and comfort.  But my book is almost 40 years old, and I want to protect it, so I left it in the safety of my house.

In the car this week, I've turned off the news and listened to the Mavis Staples CD We'll Never Turn Back.  What a great CD.  As I've driven, I've thought of how often I've turned to spirituals for the same kind of solace that the L'Engle book offers. 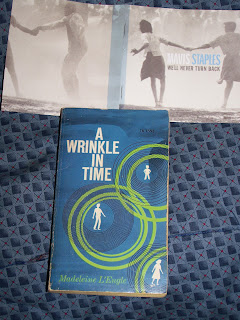 I love the lyrics in spirituals that urge us to be strong, to not be swayed, to rest in the knowledge that good will triumph.  It's the same theme of A Wrinkle in Time, and it's probably the reason that I return to both periodically.

Of course, spirituals have a history that goes back further than the Civil Rights Movement. Tradition tells us that slaves sung many of those songs, or older variations, as they worked in the fields.

Music historians would remind us that spirituals are but a subset of music that resists oppression.  I've also found comfort in the work of Woody Guthrie and in various punk and rock groups.  Perhaps I'll write more about that tomorrow.

In the meantime, check out We'll Never Turn Back.  You'll never hear "This Little Light of Mine" in the same way again.
Posted by Kristin Berkey-Abbott at 8:04 AM

Thanks for the inspiration. Sorry about what's happening in your workplace.