The Creativity of Sorting

Two weeks ago, I brought all the contents of my work office home.  It's amazing how much one collects at an office.  I left it boxed up while I assessed what my new office might hold.  Last week-end, I had no time to get organized.  So, I entered the week-end with hopes of making some decisions.

I have no bookcases at my new office, and I've decided not to move too many of my books to the office.  Thus, my dilemma;  my home bookcases appeared to be completely full.  But I realized that one of them was full of partially full office supplies and notebooks.  Other shelves looked full, but they were holding things like old t-shirts and things that could be stored elsewhere.

So, to simplify an 8 hour process:  I reorganized, and now all the volumes of poems that I have collected are in one bookcase, at home now (once they were at the office), in the front bedroom where I write the most often.

Along the way, there were delightful discoveries.  I came across 2 notebooks:  3 ring binders where I used to put all the pages of poems that didn't quite make it and ideas for poems that never crystallized.  I took one, and my spouse took another--these are pages from the late 90's, mind you.  My spouse started writing:  a line here, a fragment there.  He came up with an interesting poem out of my fragments.

At some point I should just throw out this material.  I've always said that generating ideas is not a problem I have--and in fact, if I never had another idea, I'd have to live to be 247 years old just to explore all the ideas I have right now--and that's just the ones I've written down.

I came across all sorts of notes that I've written on retreats and synod assemblies.  I tore them out of various notepads, and I'll keep them in a 3 ring binder so that I can find them easily.  I've got ideas for several retreats that I could pull together.  I'm glad that I found these notes.

It's good to feel a bit more organized, although I still don't really have room for all these books.  Still, they'll be easier to sort once they're out of boxes.  I knew that if I left them in boxes for too many more weeks that they'd still be there months or years from now.

On Sunday, I enjoyed more cooking creativity:  more on that if the recipe I created turns out to be delicious at lunch today.  I did some sketching at church: 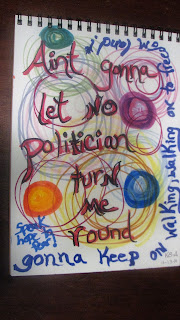 I wouldn't want to have this kind of week-end each week; although I made time for creativity, I did get to the end of the week-end feeling like I wasted it.  But my books are put away, and I've sorted through piles and piles of paper, and I'm ready for the week to come.
Posted by Kristin Berkey-Abbott at 5:07 AM