I did not go to the first annual spinathon last year.  I wasn't sure I wanted to make the sacrifice of time or money.  I said, "Why should I pay $25, when I've already paid for a gym membership so that I can take all the classes I want?"

But as I heard everyone talk about how much fun they had, I found myself wishing that I had gone.  After all, the money was for a good cause--to support the very gym where I took spin classes.

This year, we had a competition:  the people who went to the most spin classes in January would win 1 of 4 spots on a spin bike in the spinathon.  It was great motivation, and I'm happy to say that I won one of the spots on the bike, the 11-noon 80's Hair Bands ride.

At 9:50 yesterday morning, I got to the hospital grounds where the outdoor spinathon was held.  I wanted time to check out all the other stuff, but I ended up never getting the free massage--as you probably would suspect, the waiting list for a free massage is always long.  I did eat several fruit cups, a delicious mix of melon chunks, pineapple chunks, strawberry slices, and grapes.  I tucked away a few granola bars for later.  I got my free T-shirt.  I watched the kids having their faces painted and meeting the police dogs and horses.

My time on the bike was both fun and grueling.  I knew that we would win as a bike team if we covered the most miles, so I wanted to do my share.  I don't know the results, but I know that I'm sore this morning (feet, hips, and lower back)--the kind of sore of having pushed myself.

It was fun to spin in a much bigger group, although several times people checked to make sure I was O.K.  I turn bright red when I'm working out hard, but in a normal spin class, in a dark room, people don't see that.  We were under a tent, which was fortunate, since I didn't bring sunscreen for the sunny times or rain gear for the showers that swept through every so often.

Here's a picture that someone else took: 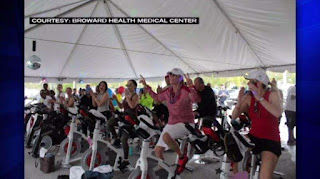 As I drove home, I thought about how the spinathon reminded me of the road races of my youth.  It was fun to be in a big group with such a mix of ages and abilities.

But it was also different--someone had to move all those bikes.  I'd like to do a spinathon more often, but I won't because there aren't that many.  The logistics are much more complicated than putting together a road race.

I'm glad that I participated in the second annual spinathon.  What if I had waited until the 15th annual spinathon?  I'd be sad at how many opportunities I had already lost.

It's a life lesson, I suspect.  I know that I say "no" to opportunities too often--and that I often say "yes" even when it may not be the wisest idea.  I'm prone to think about what other people want, not what I want.  I tend to consider all sorts of angles when it comes to decisions about how to spend my time, which means I may not put myself as a high enough priority, especially for opportunities which don't really take a lot of time or money.

Let me remember the lessons of the spinathon!
Posted by Kristin Berkey-Abbott at 7:50 AM