Yesterday morning, I thought about skipping the AWP panels that were offered at 9 a.m.  I was mildly interested in a session on Angels in America, but I had heard a lot of commentary on it last year and thought I might not learn much that was new.

In the end, I went to that session, and I am so glad that I did.  What an amazing session.  Unlike with some sessions, the presenters did not read to us from papers.  They did not read from their published works.  It was a conversation between 4 experts who are also writers for popular publications and teachers, so they have both the intellectual chops and the expert way of making it all interesting.

It was a great conversation about the play, about the 80's when the play is set, about the 90's when the play was first performed, and about the time we're in now.  Suddenly the play's politics all seem eerily relevant again.  And, as the presenters reminded us, the disease of AIDS is far from vanquished.

I went to a second session which I thought would be about book tours and taxes, but it was soon apparent that it was about the benefit of signing on with a speaker's bureau to arrange your speaking engagements for you--if you're getting about $1000 per engagement already, although people getting $2500-$5000 is more their target market.

At this point, that's not me, so I left and went back to the room to get the Bookfair map.  On the way back, I stopped to see the cherry blossoms up close--I'd been seeing them from the light rail train that's been taking us back and forth to the Convention Center. 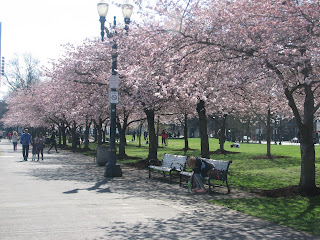 Imagine my surprise when I discovered that it was also a memorial to the Japanese citizens sent off to U.S. camps during World War II. 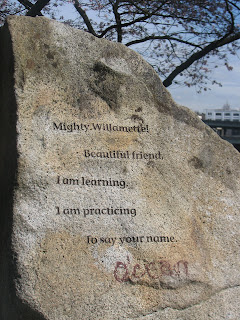 Beautiful stones with haunting words lined the path beneath a blizzard of blossoms. 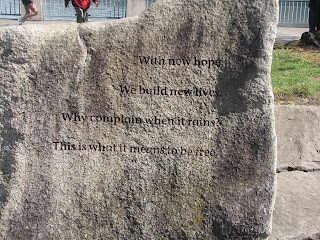 I walked across the bridge instead of hiking back to a rail station.  It was kind of cool and kind of disconcerting.  I didn't get the great pictures I thought I would get.  And the bridge was a bit bouncy when the big trucks rattled across.  But there were other pedestrians and cyclists, so I didn't feel like I was where I didn't belong. 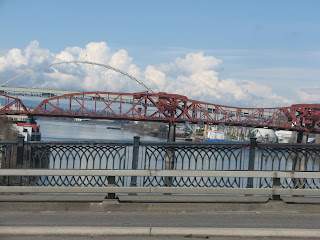 I went to the bookfair and made my way to the Two Sylvias table where I finally met the poet Jeannine Hall Gailey in person.  Jeannine was sparkly both in clothing and in personality.  I feel I look a bit bedraggled, but I had hiked over much of the convention center and the bridge and the park, so maybe I should give myself a break. 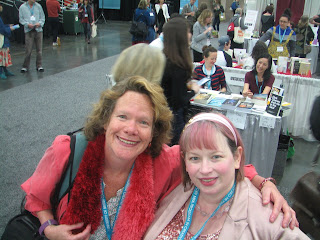 The bookfair is a bit overwhelming, and I didn't want to get in the way of book sales, so I didn't stay long.  I thanked Kelli Russell Agodon for her work and was on my way.  I need to force myself to go back to the bookfair today.

As with much of the AWP, I'm aware of so many opportunities that I'm not pursuing.  I'm not going to each table at the bookfair to make editors aware of me.  I'm not looking at publications to see if they're a good fit for my work.  I'm not networking, so I won't be meeting people who might get my work to publication.  Part of me thinks, I'm 53 years old--what's the point of all this?

I went to an afternoon session that I thought might address these issues, a session about writers over 60, but the panel organizer had something else in mind.  I try not to be annoyed about sessions that aren't what I want them to be, but I had really wanted something else.  Most of the presenters presented their psychic landscape in the face of death that's coming sooner rather than later, and one woman read some of her poems about L.A. police and contamination from industry, and I'm not sure what any of that had to do with aging.  I came away understanding their states of mind, but without any information about how they carry on in the face of it all.

We finished the day by going to a session about balancing one's own need to write with one's need to help students with their writing.  It was a good session.  I'm here to tell you that no one has the answer to work-life-creativity balance issues.  But it's good to meet others who confirm that the struggle isn't imaginary.

We made our way back to the hotel.  We thought about getting a doughnut from the iconic Voodoo Donuts, but the line stretched far down the street.  Can any doughnut be worth that wait?

I hope to be able to answer that question later today.
Posted by Kristin Berkey-Abbott at 8:43 AM