An Administration Bookended by Marches

A week ago, I was finishing this sketch and looking forward to a typical Epiphany. 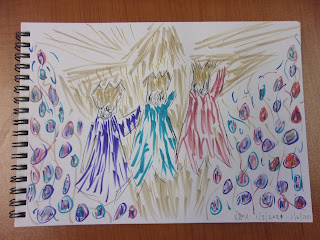 January 6, 2021 was indeed a day of all sorts of epiphanies.  I've been doing a lot of thinking about the storming of the U.S. Capitol.  At first, I thought it was a march that had gotten out of control.  Now I think we were looking at a more traditional coup attempt, cloaked in the strange fringes of right wing culture--hence the animal skins, the Confederate flags, disturbing iconography of all sorts.
I am grateful that it wasn't uglier.  I am thinking of a generation of school children who grew up to be Congressional aides and pages, who learned how to deal with armed intruders in the nation's public schools.  They knew to barricade the doors with heavy furniture and to stay quiet.
I am thinking of the Trump administration, bookended by 2 very different marches.  There was the huge march in January of 2017, when crowds of women came to D.C., many of them wearing pink hats, many of those pink hats with pink ears.  And then there was the one last week.
If one was writing a novel . . .
Posted by Kristin Berkey-Abbott at 7:36 AM