My Week in Collage

This past week has seen me return to collaging techniques again and again, if we use that term loosely. Or do I need to use it loosely? You decide.

In my Poetry class, which is a Creative Writing class, I have my students assemble a small manuscript. I want them to have the experience of thinking about how poems go together in a larger work, whether it be a chapbook or a book with a spine. Will they go on to be poets? Doubtful. It's a class for elective credit. So why bother them with this task?

It's important in a poetry class to remind students that poems don't exist only in anthologies. When I first started conceptualizing the class I would teach, poems didn't exist online the way they do now, so I focused on books. Most of my students had never held a single volume of poems in their hands. So, I brought in a pile of them.

I wanted an exercise that would make them interact more with the book, instead of just flipping through them. So, at last week's class, I passed out volumes and slips of paper. I told them that for each book, they had to write down at least one line that spoke to them. Then we put them in a bag. When we took a break, I sent students out with slips of paper and told them they needed to return with observations written down.

We did an exercise similar to one the Kelli Russell Agodon described here. My students started writing, and every few minutes I pulled a slip of paper out of the bag, and they had to change directions. The paper might have been a line from a poem or it might have been something like, "Students rolling dough" or the words from a sign that a student had written down.My students came up with some intriguing starts. I look forward to seeing what they do with the material they created during what was essentially a very long pre-writing session.

That was Thursday night. On Friday, I joined several other teachers for a field trip down to the Rubell Family Collection. What interesting art was on display. I particularly liked the work of this artist (click on each image to enlarge). We walked into one gallery and hanging on the wall were 6 large (poster size) works of lines of death metal lyrics. The lines were surprisingly poetic, even though they would have been shocking to more conservative people: "Solstice of Oppression," "Feeding Off Unholy Growth," "Sculpting the Unclean." Our guide told us that if we searched, we could find those actual lines penned by actual people.

I'd have loved to talk to the artist. Did he just put them in the artwork randomly? Did he think about how the lines worked in relation to each other? I'd love to know more about his process.

I'd already been thinking about creating a collage out of my own poems for my art project for the week. As I said last week, I have a lot of poems that mention Ash Wednesday themes. So, on Sunday I printed them all out and put them on a prepared canvas. I also cut apart a calendar page. Once I placed the fragments on the canvas, I couldn't figure out how to glue them down, so I took photos. I decided the photos would be enough, so this artwork no longer exists in the real world: 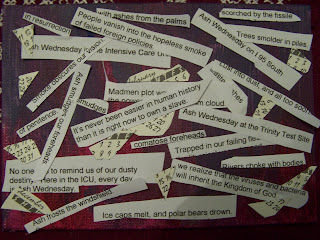 Then I decided to return to the fireplace. I wondered how the work would look with some actual ash. Here's that version: 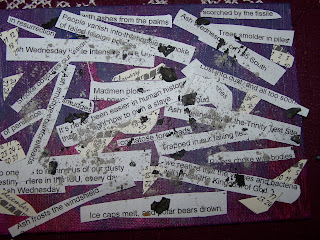 Yesterday, I was successful in starting to learn the program Movie Maker, but not successful in uploading. I'll keep working with the upload issue, and hopefully, with tomorrow's post about my first attempt in making an animated poem (or should I just call it a video poem? a visual poem?), I can include what I did. It was quite exhilerating to be working in a form that was so new, yet so familiar. More on that tomorrow.
Posted by Kristin Berkey-Abbott at 4:18 AM