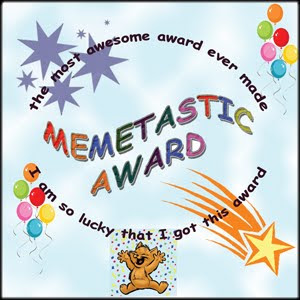 I have won a blog award! It's the first blog award I've ever won, and thanks to Sandy for nominating me. Sure, the rest of the world is watching the Grammy awards and arguing about whether or not Eminem could have reformed himself. I will not be watching because it will make me sad that I have no idea who most of these performers are, and alas, it's not because I'm listening to far cooler music, the way it once would have been.

But, enough thinking of that. Back to my award. It's the Memetastic Award. I know, you've never heard of it. Neither had I, before yesterday.

So,the Memetastic Award started with Jillismo and has passed from blog to blog, and one of my duties as a recipient is to send the award on to five other bloggers. So, I choose the first four because they were some of the earliest creative writing bloggers whom I read, and they helped me see the potential in blogging and want to do it myself:

Shefali has just published her first book of poetry, which is wonderful, and I want more people to know about her work, so I'm giving her this award in slot #5. Plus, later this week, I'll write about the book.

The other requirement is that I list five facts, four of which are lies. Guess which one is true!
1. I have an MFA from the University of North Carolina in Chapel Hill.

2. I am a certified spiritual director with a thriving private practice.

4. I was born on a U.S. Air Force Base in France on Bastille Day.

5. I've published a Creative Writing textbook that was just adopted by the 100th school to choose my book.

Let me know if you have any guesses for which of the above statements is the true one and I will reveal the right one later this week. Stay tuned...


***Requirements of the award:

Congrats! You ARE memetastic!!

Yay! I'm going to guess #4 is true b/c I took French in high school and think it would be cool.

Number two is true -- I just know it!

Thanks for nominating my blog! i dont deserve it and i know it. And everything but #4 is false?

CONGRATULATIONS! I hope #5 is true, it should be!

I'm guessing #4 is the lie! Thanks for the shout-out!

What a lovely surprise! Thanks!