Of Time and the Creative Process

The first time I ever wrote a research paper was in the eleventh grade, back in 1982.  Let us take a moment to think about how different it was then.  I typed the paper on a typewriter.  I had to leave space for the footnotes, which means I typed the same page multiple times.

When I was done with that laborious process and turned the paper in, I felt such a lightness and freedom.

I haven't ever felt that feeling in the same way again, but that doesn't keep me from expecting it.  With this past week, which meant that I turned in grades for 3 online classes and finished up my administrator duties for Fall quarter, I expected that feeling too.  But the finishing of each task just seems to bring more tasks--no time for euphoria.

Still I want to capture some of the highlights from this week while I still remember them:

--First, a funny moment.  On Thursday morning, my spouse told me that he dreamed that I was pregnant.  I said, "That would be a Christmas miracle indeed."  I'm 49.5 years old, after all.

My spouse did an imitation of Abraham/Zachariah, those men in the Bible with wives who conceive long after the time it's possible:  "What do you mean?  My wife is old . . ."  (imagine this said in a Yiddish accent).

I had spent the morning writing about Joseph and the Virgin Mary, so I was startled when he channeled Zachariah, not Joseph.  A bit sobered, I said, "So, we're different characters in the Advent story now?  Are we that old?"  Yes.  Yes we are.

--The graduation speeches Thursday night seemed more meaningful to me.  The speakers focused on failure and on trying again.  In some ways, not traditional speeches, but I appreciated the message.  I feel like I'm surrounded by people with positive publication news, while I barely find time to write a bit here and there, much less send proposals out.  I needed that message that just because I'm not successful now, it doesn't mean I'll never be successful.

--But I did untangle and reweave a part of my memoir/essay project that I had been dreading.  It's the end of the book, where I talk about dead dictators and King Herod and inspirational leaders like Vaclav Havel and Nelson Mandela.  The reweaving was not as hard as I thought it would be.

--Before graduation, I was talking to one of the artists at school.  I had brought in some of my canvases to fill up the broad expanse of wall in my new office.  I painted them in 1998, and part of me wondered if they're too old, if I should be hanging more recent work.  Then I felt the despair of realizing that I'm not doing much in the way of visual arts these days--despair and a bit of self-castigation.  So easy to slip into evil guidance counselor mode:  "You're not living up to your full potential."

Anyway, later in the day, when the artist was in my office, she asked about the canvases.  She said, "That one is quite striking.  You've really got something there."  Here's a bit of what it looks like: 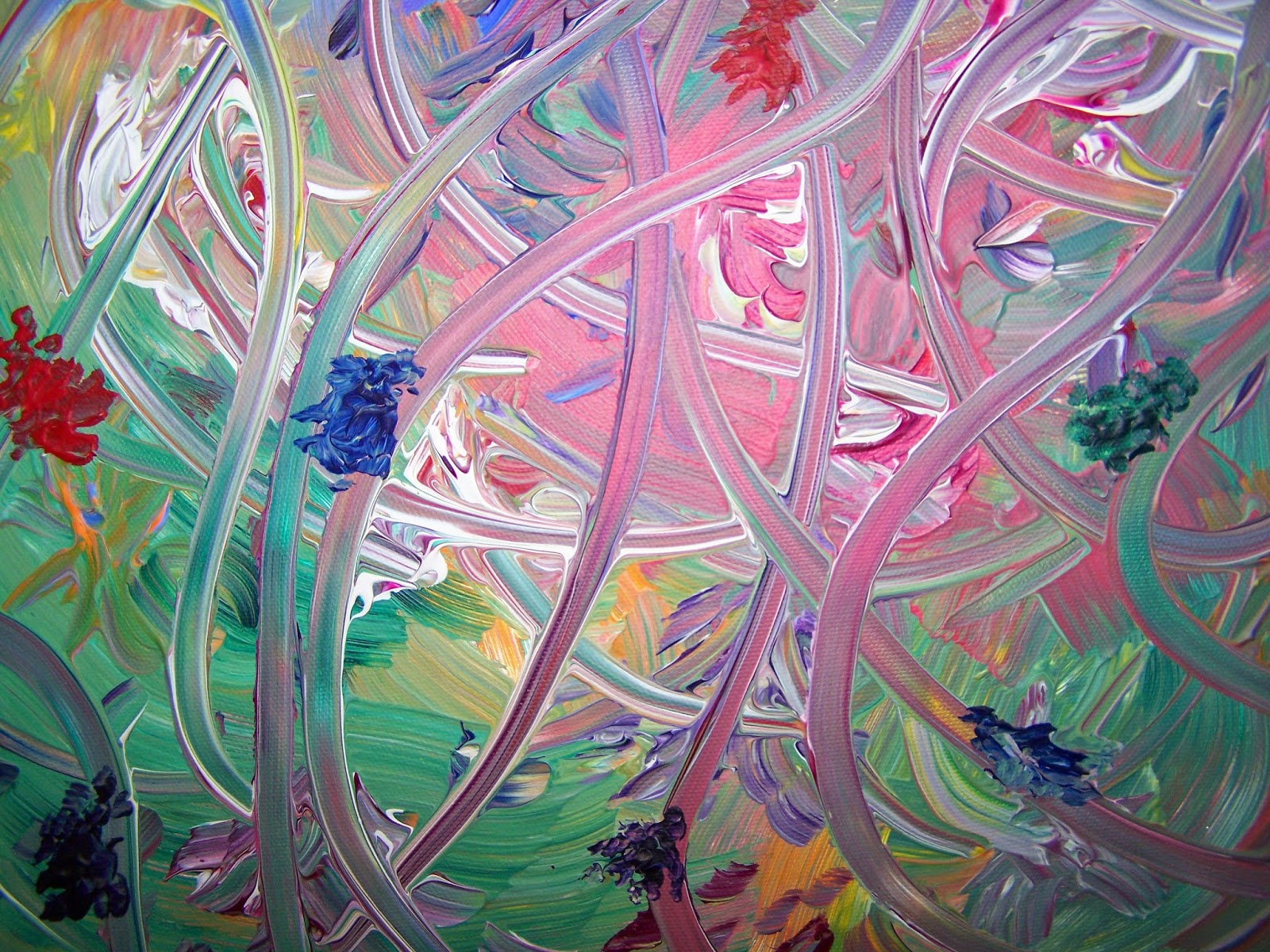 She didn't have to say something positive.  Now I didn't expect her to tell me how awful a painter I am; she's not that kind of person. But the fact that she gave me some praise--well, that gave me hope that maybe all is not lost for me.

--I also had a colleague who told me that she assumed that I would be a dean some day, and then a higher position.  That, too, cheered me.  She looked in the direction of my bookcases and said, "I'm assuming that's what you want."  I thought about talking about how I yearn for my poems to be showcased in a book with a spine.  I thought about talking about my memoir/essay project and how I want to be my generation's Kathleen Norris--but then I'd have to explain who Kathleen Norris is.  Instead I simply smiled and nodded.

--Most weeks I am very good at saying the time that it takes is the time that it takes in terms of my creative work.  Will my work ever be known far and wide?  Will I be seen as an important voice?  I also think of doors that have opened that I couldn't have anticipated, like my blogging for Living Lutheran.  So, I will keep my focus on the work and hope for the best.

--I am also aware that there are many people out there who would be envious of my other jobs:  an administrator, an online teacher.  I also take time to feel gratitude for those aspects of my life.  After all, if I didn't have those, I'd likely be running myself ragged to pay the bills and have no time to write or paint or have much of a creative life at all.
Posted by Kristin Berkey-Abbott at 6:23 AM