We are back from a whirlwind trip to Williamsburg, Virginia, where my parents live.  My sister, brother-in-law and nephew came down from Maryland, and we celebrated a late Christmas.  Plane flights are so much cheaper before and after the two weeks around Christmas.  And I like stretching the season out.

I had kept my eye on the weather, but I certainly wasn't expecting this snow that came on Sunday. 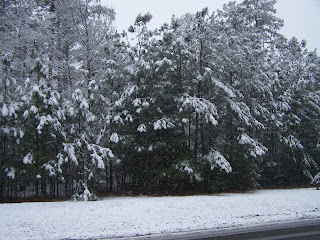 The weather report called for highs around 70 on Saturday and 19 on Monday, so I knew some sort of system would be moving through.  But there was no mention of snow.

Still, it was lovely.  We sat by the fire and watched the snow, and then we bravely went out to church. 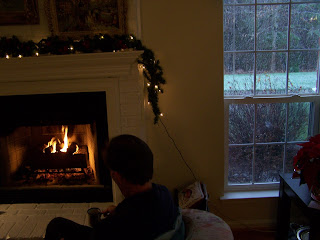 And then we had brunch and then more hours of sitting by the fire and watching the snow. 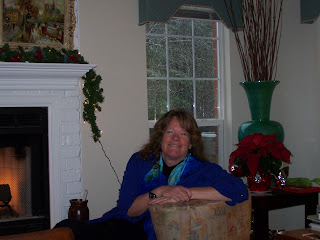 My sister had been working out at the gym, and she told us about the storms that had swept across South Florida in the wee hours of Sunday morning.  Our friend who lives in the back cottage posted some pictures, like this dramatic one: 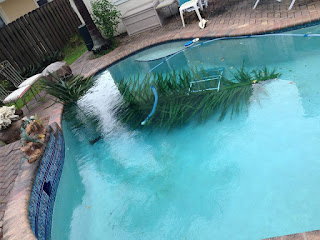 Yes, that's a chair in the pool along with the palm frond.  Amazingly, the chair is OK.  There was no mention of the threat of this kind of weather when we left Florida. 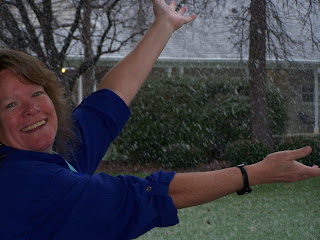 Against this backdrop of strange weather, I read a pair of apocalyptic books, both set in the U.S. west, both in times that seem like they're just around the corner, not far away.  I started with Claire Vaye Watkins' Gold Fame Citrus, which was compelling and poetic, but seemed to just fizzle towards its ending; by the end, I hated almost every character.  Karl Taro Greenfeld's The Subprimes was both savage and funny and satiric, and I liked the characters better.

The ghost of John Steinbeck haunts both books, as does the shadow of Stephen King's The Stand and the vampire series of Justin Cronin.  I continue to be intrigued by the apocalyptic visions set in the desert southwest--are they different than apocalyptic visions set elsewhere?  If I was a graduate student, perhaps I'd write a dissertation.

But as I am a woman at midlife without the time to write what really tugs at me, I'll leave that literary analysis to others.  It was wonderful to sit and read, and to have time to be with my family.  It was a quick week-end, as we arrived Saturday morning and left on Monday--no time for sightseeing or shopping.

In so many ways, it was the perfect end to the Christmas season--a chance to pause, to be together, to remember what really matters.

Posted by Kristin Berkey-Abbott at 6:51 AM