Yesterday, we had quite a rain event, which I blogged about in this post.  Later, I made a Facebook post with this picture of our neighbor taking some of the neighborhood children for a ride in his kayak: 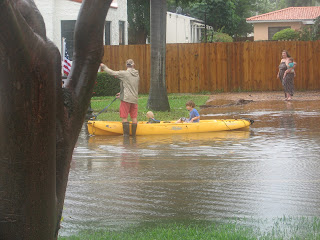 That's the middle of the street, mind you, with an hour of rain yet to come. 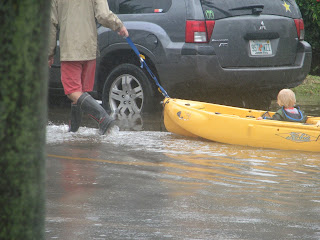 By early afternoon, the waters had receded.  I feel lucky--we had some water intrusion into our backyard cottage, in the usual spots, and water on the front windowsill of the main house in the usual spot, but it would have been much worse if we had had another few hours of rain.  We were home, so we could move the cars into the driveway--if not, the car parked in the street might have been ruined.

After a nap, I spent the afternoon reading--and reading a big book of nonfiction, Timothy Snyder's Black Earth:  Holocaust as History and Warning.   How long has it been since I've read something this big, this important?  I looked at my book list, and earlier this year, I read a big biography about The Inklings and a book about the FBI and radical groups in the 70's.

I ordered the book because I read Snyder's Facebook post on twenty lessons from the twentieth century, adapted to the circumstances of today.  I read it before Thanksgiving and found it such an interesting approach that I saved it to the hard drive of my computer.  It was still on my brain when I made an Amazon order last week, so I added it.

I had hoped that the book would focus more on the warning, less on the history--it doesn't, but the history is fascinating.  About huge subjects, like the Holocaust, I often think I have nothing left to learn, but that's not true.  I read half the book yesterday, in part because it was riveting and in part because my spouse was grading, I was caught up on my grading, and a window of time opened up for reading.

So, what am I learning/remembering?  It's scary to be in Hitler's brain.  His view of humanity was dark, and he took ideas about survival of the fittest to dangerous extremes.  He saw us in a race for scarce resources, and the only approach was to fight viciously to win.  His view of the place of the Jews is almost incomprehensible to me.

And here's what's scary--he knew that he needed to keep those views hidden, even as he was preparing the country for a huge war where Germans could prove themselves.  I don't seen anyone quite like Hitler in our current landscape.  Of course, go back in time and only a few of Hitler's contemporaries understood his mindset.

Here's what seems most relevant to our current day:  the importance of the nation-state in protecting minorities.  Snyder points out that the worst atrocities happened after Hitler destroyed the various institutions of the state.  Jews and other minorities weren't killed in huge numbers in Germany.  They were shipped east, where Hitler had created space for anarchy and bloodshed by destroying the state.

I am finding this book both oddly comforting and disconcerting.  It's good to remember that the world is more stable right now than it was in the 30's, when fascists rose to take power.  It's also sobering to realize how quickly that can change, as Jews in Austria in 1938 would remind us.

It's also good to remember that we have some power, although we may feel like we don't.  And those of us who have privilege because of our race, our class, our gender, our citizenship--we have a duty and a serious responsibility in times like these.
Posted by Kristin Berkey-Abbott at 7:22 AM