Yesterday in my very early zips around the internet, I saw that it was National Scrabble Day.  I thought, I wish I had known earlier--I could have done something special for our students.  And then I thought, well it's not too late.

Had we gotten rid of the Scrabble game long ago?  I checked the closet--nope, we still had it.  So I pulled it out, dusted it off, and took it with me to school.

We have a wonderful gathering space, and not a week goes by that I'm not grateful for it.  It's got a microwave and a full size refrigerator, a long counter and sink, cabinets, several vending machines and lots of tables.  There are days I wish we had a stove, but I understand why that would be a problem.

I got to school and set up a game on the table.  I started with a word, and I wrote an invitation to the campus: 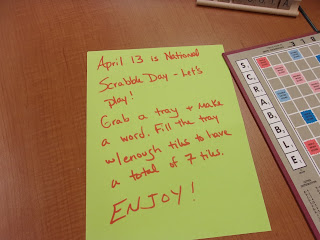 As the day went on, people added a word here and there. 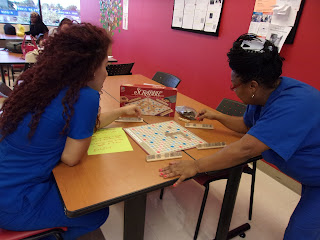 At one point, several people actually played a game.

As I put the game away at the end of the day, I reflected on the final board, with its mix of words and non-words, a board created by people who clearly don't understand the rules of Scrabble.  But it did look like a board that was created by people having fun with letters and language.

Throughout the day, I overheard snippets of conversations where people reminisced about the games they had played and enjoyed.  Even if people didn't have time or inclination to participate, the presence of a Scrabble game in process jolted them into a mindfulness that they didn't have before going into the break room.

I liked it because it was mostly unplanned and spontaneous.  Several times throughout the day, I greeted people by saying, "Happy National Scrabble Day.  Don't forget to play the game in the break room.  After all, this day only comes once a year."  People smiled as they hurried on to classes.

I want to record these small successes as they come, especially successes that don't cost money.  We don't have the kind of student services department that larger campuses would have, a staff that would plan these kinds of events.  In future years, we may have even less of a budget for student appreciation events, and I want to remember that there are ways to improve the atmosphere that don't cost much.

Posted by Kristin Berkey-Abbott at 7:25 AM