Ministering with Our Inspirations

My online journaling class meets in a Zoom meeting once a week, and we talk about what we created and the insights of the week.  One of my classmates said something that resonated with me this week.  She talked about how she was finding the daily discipline of not just the class, but the rest of life, overwhelming.  But she said she was being ministered to in powerful ways by the dailiness that everyone else was keeping.  Instead of feeling guilty about her lack of activity, she was feeling like she was part of the group by the work that we posted and the way it spoke to her.

I love this idea that we minister to each other even at these times we may not realize it.  I love the idea that even if we're not feeling inspired or capable right now, that doesn't mean our muse has left us permanently.  We can feed the well by enjoying the work of others.

It's that time of year when I feel like I'm running from pillar to post--what an interesting phrase.  Yesterday I was planning to do the Walmart run for Thursday's Meet and Greet.  But I had to take the  Noel-Levitz tests to the Ft. Lauderdale campus.  Not a big deal, I thought.  I decided I'd pick up the BJ's card and get the cookie tins that we give out as presents to our externship sites.  I thought I might be able to get the stuff I would have gotten at Walmart, but it was not to be.  So, I still have to do that, along with the end of the term stuff, along with accreditation stuff . . .no wonder I'm tired!

But I did stop along the way to pick up more sketchbooks.  I've been successful continuing to sketch/journal each day.

I've had fragments of ideas and inspirations.  Yesterday as I was listening to an interview with Bradley Cooper on Fresh Air as I did my journaling work.  Later, I thought about a character who says, "I'm living the plot of A Star is Born, except I'm not young, and I'm not a rising star, and the music isn't as good."  I'm not sure where that plot would go, but probably nowhere happy.

I also worked on a poem that begins this way (the rhythm is off in the second line):

Be my Dietrich Boenhoeffer,
I'll be your Archbishop Romero

That poem too must end in tears.  But I like the way it's a different kind of love poem.

In my journaling, I've been writing about liminal spaces and thresholds and what comes next.  There's also a bit of mourning at midlife about what's left behind.  On Monday, I created this image: 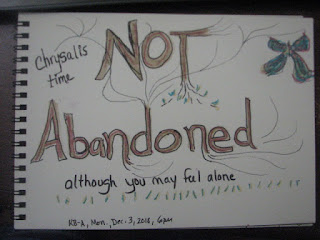 My instructor said:  "Chrysalis time... That would have been such a lovelier description than "empty nest" for that first year _____ and I no longer had kids at home... especially since I very much felt like I was curling up a lot of the time."

Yesterday, I thought about empty nests as a valid metaphor, even for those of us without children, and this is what emerged: 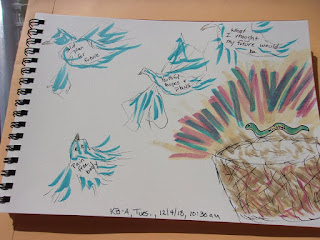 It will be interesting to see how much of this works its way into later poems.  For now, I'm enjoying this unique kind of journaling.
Posted by Kristin Berkey-Abbott at 5:44 AM