The Moon Exerts an Extra Pull

For days, I had heard about how magical the moon would be at moonrise on Saturday. We decided the best view would be at the beach. I couldn't imagine that it would rival another moonrise several years ago. That moon was the hugest moon on the horizon I've ever seen, huge and white and astonishing. Saturday's moonrise, while lovely, didn't seem out of the ordinary. But we had the camera, and we took pictures. 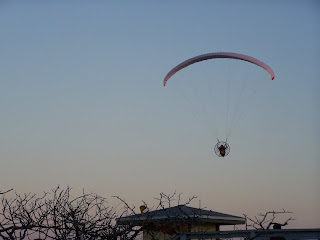 When we got to the beach, we heard something like a lawnmower engine. But it was coming from the air. What was it? An interesting contraption, one of those fan engines like you see in Everglades boats, coupled with a surfboarding parachute thing. Those bare twigs are sea grapes that have been cut back. I like the Asian look, but the roof rising up is most likely a snack shack. 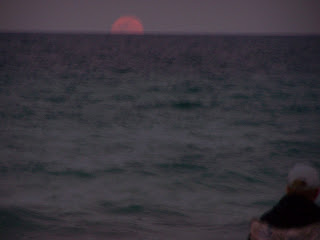 My spouse tried to keep people in the picture to give a sense of perspective. Here we are at the beginning of moonrise. 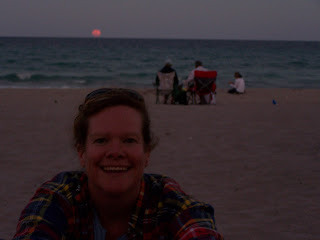 My spouse tried to capture me with the moon behind me like a halo. He couldn't quite pull that off, but I like how happy I look. I decided to keep the twilight photo for this photo essay, rather than the clearer Photoshopped version that my spouse created later. 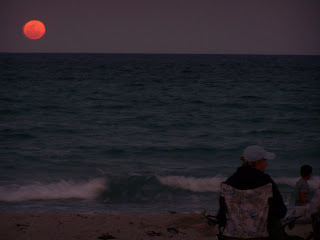 I like the waves in the picture. This picture is the last one to capture the moon as we actually saw it. Later pictures give the moon a Halloween effect, all orange and strange. We didn't actually see that, but we don't have a very sophisticated camera which could capture what we saw. 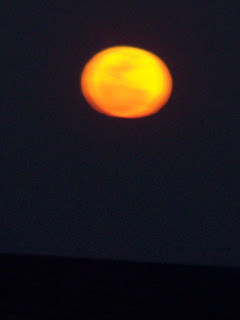 Later pictures show a moon with faces in it, a moon that looks like a place where mythical creatures would live. 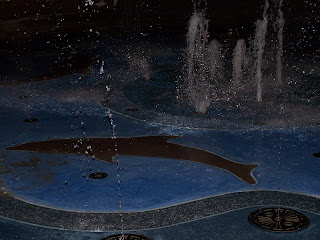 I took other pictures too. We walked by a beach-side park that has a water-play area, with shooting fountains that children can run through. The fountains translated into sparkliness when I took the shot. 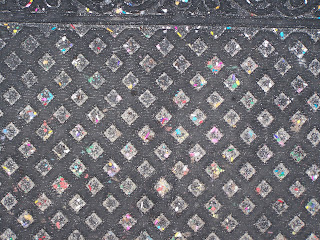 We finished the night at an ice cream shop. I looked down at the mat in front of the window where we stand outside and order. I love the combination of black rubber and sprinkles from day after day of ice cream service. I took the shot, and my spouse said "What are you doing?" Then he looked down and saw what I saw. What can I say? I'm a texture and color freak. 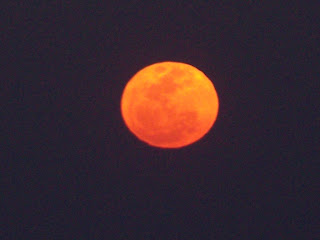 A final moonshot for you, more suitable for October than March!

And even though last night's moon was the special one, today is the day that marks the vernal equinox. Happy spring! May all your dreams and daffodils resurrect themselves.
Posted by Kristin Berkey-Abbott at 7:52 AM

Thanks for this! (Cloud cover here.)