Originally, my chapbooks were supposed to ship July 8, but there were delays at the printers.  Yesterday, 10 months after first hearing that my manuscript had been accepted, the books arrived!
Happily that crunched corner did not translate to damaged books.﻿ 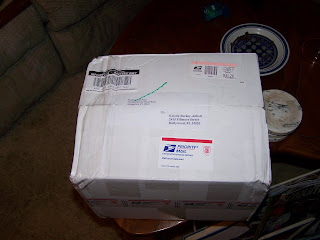 The picture below works as a metaphor for the whole process.  All along, I've had some idea about how the finished book would look, but it's been an idea wrapped in tissue paper, a book I can almost see, but can't quite.﻿ 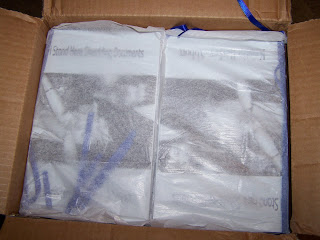 And then, the books are unwrapped, and I can exhale.  They're beautiful, as books-as-artifacts go.  I'll be happy to have them join chapbook #1, Whistling Past the Graveyard, which I had far less creative control over in terms of design, but which also made me happy. 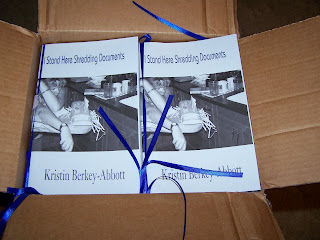 If you ordered a book, it should be on its way to you.  I'll be interested to hear what you think.

And if you're wishing you had ordered a book, you can still order one from the publisher, from Amazon (eventually), or from me!

Posted by Kristin Berkey-Abbott at 8:13 AM

I got my copy yesterday as well! I love the cover!

Congrats! Wahoo! Still waiting on mine. Hoping for Monday. :)

Are those ribbons bookmarks? In that picture they look more like little streamers, or those noisemakers you get for New Year's. I'm guessing you had a similarly festive mood upon finally opening that box.

Thanks everyone! And Kay, yes, those are bookmarks--but I love the idea of festive noisemakers and the connection that you made.