The Last Days of the Stella Show

In the last week, I saw a locally produced PBS show on the Frank Stella exhibit at the Museum of Art Ft. Lauderdale complete with Frank Stella talking about the pieces.  I thought, why did I think I didn't want to go see this show?

The main reason:  I had no idea that he was as multi-faceted an artist as he was.

I was afraid I had already missed it, but happily, it's on display until July 29.  It's worth seeing; go here for more information.  I worked extra hours throughout the week so that I could leave work a smidge early yesterday.

I had thought we might have to pay more for such an extensive show, but the museum admission of $12 includes the Stella exhibit.  We had an even happier surprise.  We showed our Broward College faculty IDs hoping to get a discount, but instead, we got free admission.

Because it was late on a Friday afternoon, we had the museum almost all to ourselves, which is what I wanted.  What an amazing show!  It's got the art that most of us know.  Here I am at a 2011 reading in front of that work: 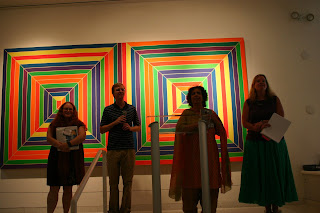 But the show also includes his later work which is much more sculptural.  Here's a picture of that sculptural work, with a view of one of his first pieces of art that he created (all of the following pictures come from the Museum website): 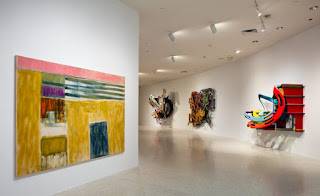 We spent a lot of time with that sculptural work, looking at it from many angles.  We were able to get very close.

There was also a gallery that showed his process papers, notes, and models.

The most interesting process part to me wasn't in the above gallery.  It was a large work on the second floor that looked very much like a collage, but up very close, I realized it was completely 2 dimensional. In the left side of this picture, you can see part of one panel of the multiple panels and an amazing metal sculpture: 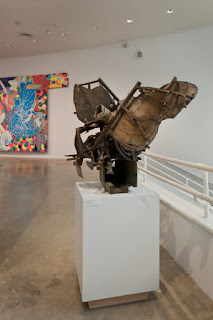 When I read the text, I learned it was originally a collage and then a photograph, which enabled Stella to enlarge it and paint it, complete with shadows that fooled my eye.

And then I turned around, and there was the collage--so cool!

I really loved all the assemblages.  It makes me want to turn our cottage into a studio where we can cobble things together into interesting new shapes.

After we left the museum, we thought about wandering to Las Olas for happy hour, but I decided that I didn't want to risk having a bad experience that would color my memory of the afternoon.  We couldn't have had a much more perfect museum afternoon--what a treat!

Posted by Kristin Berkey-Abbott at 6:13 AM