Sanctuaries of All Sorts

Yesterday was another strange day, to hear that Roger Stone lives in Ft. Lauderdale and appeared at the U.S. Courthouse downtown.  As I left spin class yesterday morning, a sheriff's helicopter landed on the roof of the hospital, which I thought was strange--that's not usually how patients get transported.

Now I wonder if it had anything to do with the national news.  The courthouse is not that far away from the hospital that houses the wellness center where I go to spin class.

And by afternoon, the good news that the government would reopen.  Hurrah!  Of course, in 3 weeks, we could find ourselves in the same place again, but I'm guessing that everyone will try to avoid that.  Shut downs don't usually work well as a political tool, and now maybe everyone will remember that.

In between, I had a pleasant day at the office, with enough down time between dramas to get my extensive filing done.  January brings the updating of many forms, and since they need to go in the 7 tab faculty folders in a particular way, I usually take care of it.  That also gives me the opportunity to check to make sure that everything is in place.  Occasionally I say, "Hmm, the last time we observed this faculty member was late 2017.  What year is it?  Better get that on the calendar."  We have mostly adjuncts, lots of them, and it's easy to lose track of all that needs to be done and then recorded on paper.

Still, it's exhausting work on some level, and so, last night, as with many Friday nights, I was in bed early.  I was able to take some time to sketch before bed: 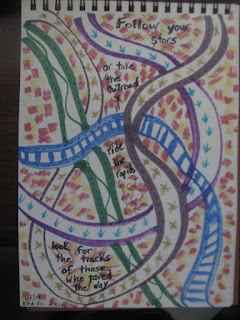 I like the vaguely spiritual imagery--clearly I'm still back in Epiphany, with its star symbolism.  I like the railroad, with its recall of the underground railroad and the idea of riding the rails that took off in the 1930's--and the ways that people get through Mexico in this current immigration story.

I think I've got the beginning of a poem!

I'm also recalling an earlier sketch that I did almost two years ago to the day.  I created the Sanctuary part and added the tracks later as I read Colson Whitehead's The Underground Railroad: 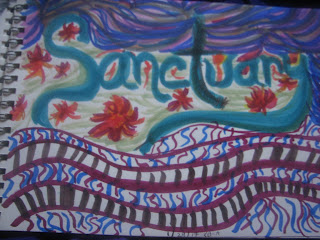 I'm used to going back through blog posts and my offline journals to see what was happening.  It's only recently that I can do this with visual journaling--how interesting!

And now it's off to today's spin class and then to the Visioning session at my church, as we decide where to go as a people of God.  Just a regular Saturday!

Posted by Kristin Berkey-Abbott at 8:42 AM