A New Poet Laureate and Thoughts on What Makes Art Valuable

I have been feeling a strange sense of accomplishment because I finished a book in the same week I started it. It's not that I don't read books anymore, although I don't read them the way I used to. But it takes me forever to finish them, unless they're super compelling or unless I'm on a plane or somewhere where the Internet doesn't distract me.

I am the person who always had her nose stuck in a book--as a child, as a teen, as a student, as a commuter, in every facet of life.  Now I'm still reading, but I'm more likely to have my nose stuck in front of a computer screen.  I still read a lot, but I read shorter pieces.

News that might have once taken days or weeks to get to me now finds me in a matter of minutes.  As we all know, that can be a good thing or a bad thing.  Yesterday, I read the breaking news that Joy Harjo has been named the next poet laureate of the U.S.

I saw a Facebook comment that remarked that the recent choices for poet laureate have been fabulous.  I agree:  Natasha Trethewey, Traci Smith--beyond that, I'd have to look up the list, but I'm rarely annoyed at the pick.

Sure, I'd like it to be me, but I also know I'm nowhere near accomplished enough.  That's O.K.  I have time.  I turn 54 in a few weeks, and Harjo is 68.  But even if I'm never accomplished enough, I'm happy that I've kept writing, kept submitting, kept checking in with this deepest part of myself that I access through poetry.

Poetry--both poems written by me and poems written by others--has taken me to places I wouldn't have found otherwise.  If you asked me to define good art, worthy art, that kind of definition would leap to mind.

In Balm in Gilead: A Theological Dialogue with Marilynne Robinson.  the book that I just finished in the same week that I started reading it, Marilynne Robinson says that good literature is subversive, which she defines this way:  "It [literature] wants very much for you to think about something in a way that you would not otherwise" (p. 182).  She goes on to say that Christianity functions in much the same way and finishes by saying"  Christ became a slave.  It undercuts cultural assumptions about what is valuable, what the hierarchies in fact are and so on.  Art sort of reproduces that great overturning whenever it's good art" (p. 182).

In the transcript of the conversation between Robinson and Rowan Williams, they go on to analyze democracies.  Robinson says, "But the issue for a democratic citizen is the questions, 'What kind of world do I want to make for the people around me?  What kind of reality do I want the people who I call my community to live in?  How can I create institutions or support traditions or whatever that actually free and enlarge the people around me?'" (p. 187).

Those ideas, too, seem like ones that lead us to valuable art.

Joy Harjo has made great art--poetry, music, historiography--that has the effect on readers that Robinson describes.  I was thrilled to hear her speak at the 2018 AWP.  I took some pictures at her session. 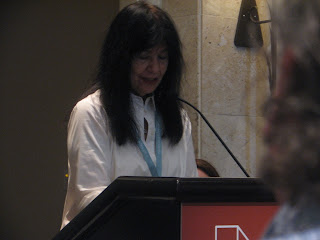 I was fascinated by her wrist, where her tattoos that have a look of ancient ancestors meet her smart watch. 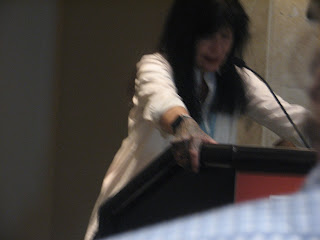 Her hand and arm seem like a fitting metaphor for much of her work.  I look forward to seeing what she does in this new position of prominence.
Posted by Kristin Berkey-Abbott at 7:39 AM