Report from the First Full Day of Synod Assembly

As I have moved through the Synod Assembly, I've taken a mental note of many things.  Because I'm traveling with a laptop, I'm not making as many handwritten notes as I might have.  But the laptop is in my room.  I wonder if I'm losing anything?  And of course, I have to wonder if it matters.

I did go back to look at old blog posts yesterday.  I was trying to determine when I was last at Synod Assembly as a voting member--it was in 2013.  In 2014, we came to the Assembly for a day so my spouse could go to a board meeting.  When I looked at my posts on my theology blog, I discovered this one from 2013 that shows that I've been thinking about seminary for a long time.

Happily, Rev. Dr. Mary Hinkle Shore the new dean and rector of Southern Seminary, reminded us yesterday that "there is no sell-by date on a call."

This Assembly has been one of the ones where I wonder why we bother to meet in person.  Most of the people running in any of the elections are running unopposed.  The reports that we've gotten could have been delivered by way of e-mail.

Still, it's good to meet in person, and I remind myself that many of the people here may need these face-to-face encounters in ways that I can never fully understand.  I ran into an old friend from my former church, and it was great to have a chance to sit with her at the WELCA table and catch up.

This year, I'm also in charge of one of the prayer stations in the chapel.  I created a prayer weaving station: 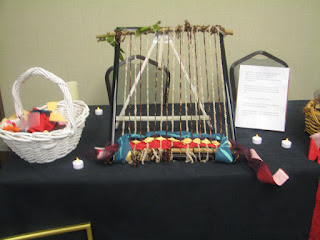 By last night, the loom was half full--that made me very happy.  The prayer chapel is very far away from the rest of the Synod events.  I'm not sure I would have found it if I hadn't been looking for it.  I brought too many strips of fabric, but that's O.K.  I'd rather be overprepared, especially since we drove here, so it didn't take much extra effort/money, the way it would have if I had to fly.

Last night, we went to a church that's also a brewery: 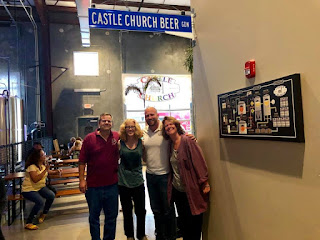 In the photo above, I'm standing next to one of the founders (the one in the white shirt).  He used to have an extensive home brewery set up in his garage, where people would gather to sample his beer and talk theology.  Still, the steps it took to go from the garage to the building they're in now--it sounded daunting to me.

Of course, it sounds daunting because it's not something I want to do.  What vision would make me want to fling myself at all the obstacles?

There have been moments here where I've thought that once again, I'm with a group of people who would only understand part of me, the spiritual part, not the creative part.  The only place where I feel I'm with a tribe of sorts is at the Create in Me retreat.  And even there, I sometimes find myself yearning for more intellectual heft, depending on the type of Bible study we're doing.

That yearning for integration may never be fully realized--I do know that.  But it also makes me wonder if I should be contemplating an on-ground seminary program.  Southern Seminary has just announced a commitment to having their graduates leave with no debt--hurrah.  And it's in Columbia, SC, where I went to grad school and still have friends and community there.

Could we have a Florida base and a Carolina base (whether in Columbia or at Lutheridge)?  As my old boss used to say, "More will be revealed."

Now, it's time for breakfast.  One HUGE difference between this gathering of Lutherans and the gathering of AWP folks:  Lutherans get to breakfast early.  I don't have the omelette line all to myself, the way I do at AWP gatherings, where writers have stayed up too late to get up early for breakfast.
Posted by Kristin Berkey-Abbott at 6:52 AM