Twas the Day After Christmas: Owls, Santalands, and Work

Most years, we're travelling, so to be home on the day after Christmas feels strange.  We don't have clean up to do, left overs to eat, broken toys to mend.

Most years, Christmas doesn't come on a Sunday, so that, too, has discombobulated me a bit.  We spent much of Christmas Eve and Christmas morning at church.  My spouse is in the choir, so he had to arrive early to practice, and we were part of the money counting team, so we stayed after each service to count money and take it to the bank.

Soon I hope to get back to more every day practices, like exercise and eating vegetables and poetry.  But for today, let me post a few thoughts and follow ups from the past week of posts.

At the end of Christmas Day services, the endangered baby owl was back near the butterfly garden creche scene.  I was able to snap a few pictures. 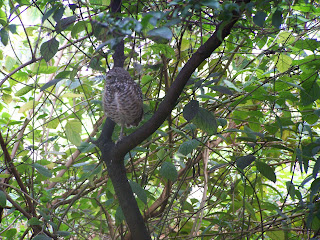 Here's a close up of the owl.  Notice that he's sitting in the Y of the tree trunk.  It will help you locate the owl in the picture below.  Look at the top of Joseph's head and let your eyes move up to find the owl. 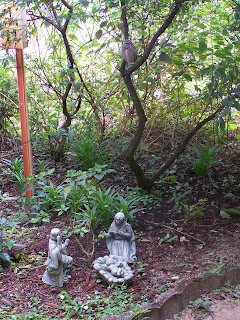 I'm not sure why I'm so intrigued by the owl who comes back to the manger.  But there it is.  If I wrote children's books, could I do something with this idea?

For those of you who still haven't gotten enough of Christmas, you might go here to listen to the now very famous David Sedaris reading from The Santaland Diaries.  It's the event that shot him to fame.  It's still wonderful:  snarky and transgressive and a strange yet oddly heartwarming look at the holidays.

Today is the birthday of David Sedaris.  Before he became so very famous, we saw him read at the Ft. Lauderdale Borders near the beach--for free. As you might imagine, the place was packed; it was 6 years after his first reading on NPR.  He was very gracious and seemed just a bit shocked to find himself so sought after.

I remember him talking about these strange little things that he wrote that didn't really fit into any standard model of anything published, but he had friends who were doing a radio show who were desperate for content.  I think that radio show went on to be This American Life.

I remember thinking that it's OK if what you're creating isn't like anything that anyone else is creating.  If there's not a market for it when you're creating, you might be in the process of creating the market without even realizing it.

And it seems wise to remind ourselves that we don't always have to know what we're going to do with the work, but we have to show up to do the work.

For those of you who have to return to work sooner than you want to, here's my favorite part of The Santaland Diaries:

My job is nowhere near as important as Havel's, and I suspect yours isn't either.  But these questions are worth considering:  does our job require us to do things that deaden our souls?  Are we losing our moral footing with the activities our jobs require?  Can we change the job before it changes us?

I still love the idea of people, Havel among them, living in a repressive regime as if freedom had already come.  Our jobs are probably not as brutal as a Communist regime, so we have even less reason for living in fear of acting as if we have the jobs we always wanted and making the changes necessary so that the jobs we have are closer to the jobs we want.

I keep thinking of all the people I've met this holiday season, people who have to work extra hours, sometimes in grueling conditions, but they managed to maintain grace, dignity, and even often, cheerfulness.  We can too.
Posted by Kristin Berkey-Abbott at 5:37 AM