What Should We Do with Our Gifts?

This morning, I went to an extra early spin class--5:30-6:00 a.m.  We did an 80's video ride.  How strange to see the Beastie Boys yelling at us to fight for our right to party.  How strange to reflect on their later fight to free Tibet.  I would give them credit for raising the consciousness of a generation of listeners on that issue.

Is Tibet free?  No, but more of us are paying attention.  I'd call that a success.

I had already been thinking these thoughts, after a Facebook friend talked about Jeff Bezos and which multimillionaires do the most for their communities.  She talked about watching the movie Paris Was a Woman and realizing how much change a woman with some money in the arts world could make happen.

I wrote, "I have often said that if I won the lottery or came into a sum of money, I'd have a great time funding various presses and groups that supported the work of women and others who haven't yet seen full representation. I don't daydream so much of having a press of my own, but of being a benefactor."

When I was much younger, I could have given you a specific list of those groups.  As the years went on, and it's become clearer that I'm not becoming rich in an overnight way, I've let the list lapse in my mind.

I'm also thinking of the newly sworn in Congress folks, some of whom must still be surprised to be there.  Do they have plans?  I assume so.

Here, too, once when I was young, I could have told you exactly what those new legislators should address, and in what order.   I might have been thinking about how to write the legislation.  Now my imagination feels as gridlocked as the current Congress.

It's time to shutter our imaginations.  I've been sending out my book length manuscripts, which has made me feel surprisingly hopeful--and that hope spreads to a variety of other arenas, not just my writing life.

In this season of self-improvement (or at least the season that is these first few weeks of January), let me also remember this nugget of wisdom in a Richard Rohr quote--I found it in Joyce Rupp's Open the Door:  "The goal isn't to get somewhere.  The goal isn't about forcing something to happen.  The goal is to be in harmony with the gifts that are already given."

If only it could be that easy--but that would mean we've discerned what gifts we have.  And of course, that we know how to be in harmony with them.

Still, in times like these first few weeks of January, when people's thoughts turn to self-improvement, it's interesting to think in terms of already having what we need.  How would our lives changed if, instead of wishing we had different gifts, we learned how to best utilize the gifts that we have.

Notice that I'm still using self-improvement language:  "learn how to utilize."  The phrase "being in harmony" suggests something different to me, a gentler, wiser approach.  That language of being in harmony brings to mind sitting with a friend, a pot of tea, and some delicious scones.

Here's a sketch I made when I first read the quote.  I should probably keep it out to remind me that I'd like to harmonize with my gifts: 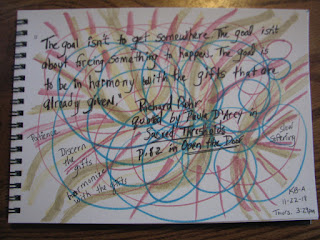 Posted by Kristin Berkey-Abbott at 7:52 AM