Wise Ones and Modern Borders

Yesterday, as I drove to a very early morning spin class, I had a vision of a poem.  What would happen if the 3 wise men had come to a border situation like the ones we have in the southern parts of the U.S.  I had planned to write a poem, but I also had a vision of a wall and border guards and wise men.

Yesterday during my sketching time, I decided to try to attempt the picture that was in my head.  This sketch emerged: 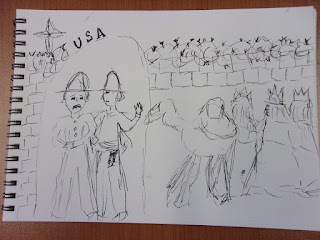 And later I added color: 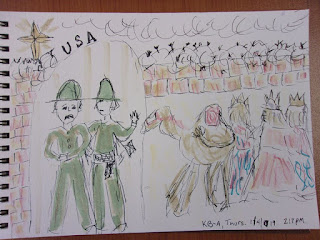 Perhaps it shouldn't surprise me that I combined the idea of the 3 wise men and the modern news cycle.  I have been greatly intrigued, and at times highly amused, by the Internet meme of the 3 plastic wise men and a camel who make their way across modern landscapes.  The wise men look like children's toys, and upon doing some "research," I've found that they're made by Playmobil or Fisher Price.  I have no idea how many people are doing this.  I haven't participated this year, but perhaps in later years. 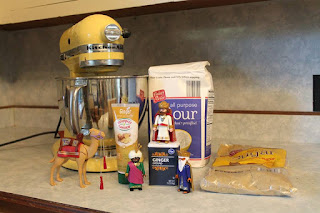 Each post has a written tag too.  Here's the one for this picture:  "Day 21: Hezekiah’s desire to bring baked goods to the infant king was met with enthusiastic support from his companions."

Until this morning, I didn't realize how many people were doing this project as a reaction to the Elf on a Shelf--a way to have a daily practice that's whimsical but doesn't involve Santa.

This morning I attempted the poem that started to glimmer at me yesterday.  It did not turn out to be the poem I first thought about.  This morning's poem begins, "I am the border agent who looks / the other way.  . . . "  The poem goes on to reference the East German soldiers who didn't shoot as people assembled at the Berlin Wall in 1989, but the wise men do make an appearance later in the poem.

Back to the idea of the wandering wisemen.  I like the daily practice and the whimsy--I like the entries that show some glimmer of the underlying theology of the whole story or other parts of the Bible.  Here's an example: 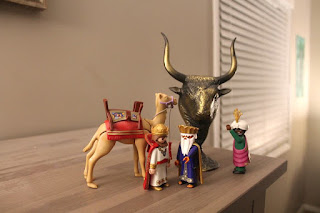 The post reads:  "Gaspar and Melchior were firmly opposed to any involvement with golden cows, citing disastrous outcomes for Old Testament travelers."

I wonder what could be done with other parts of the year?  Hmmm.  Something to ponder.
Posted by Kristin Berkey-Abbott at 5:36 AM