I have been up for hours.  I wish I could say that I was working on some sort of creative project, but it's the time of year for grading, grading, grading.  I have most of my grading done, and in the next 30 hours, I'll turn in my grades.

Then, hopefully, I'll have time for grading.

Will I decorate?  I'm not sure.  We don't have the surfaces (table tops, mantles, bookcases) that we once had to display our holiday nativity scenes.

I've had nativity scenes on the brain.  This scene at Claremont United Methodist Church has popped up several times in my Facebook feed, from a wide variety of FB friends: 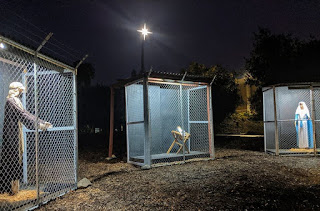 Some call it irreverent, some love it, while others are perplexed.


My own approach to nativity scenes might be seen as irreverent.  The poem I'm posting below is for everyone who is similarly irreverent about the season. In our own nativity scene hangs a purple plastic monkey from one of those games where you try to create a chain of monkeys--Pick-Up-Monkeys or some such thing.

And for those of you who are up for it, there's some interesting theology embedded in the poem. Think about all the castaways that followed Jesus and then read the poem again.

Of course, if you're not in a theological or Christmasy mood, you can see if I captured a sense of whimsy.


Through the years, the stable attracted
the odds and ends of our childhood toys:
a plastic soldier, his rifle chewed and mangled,
migrated from the war zone;
a horse, which once helped herd
plastic animals, now riderless and alone;
a Magic 8 ball with murky
water, the answers to our questions, obscured;
a nutcracker dressed in festive finery, but missing
its lower jaw, its mission in life undone;
lonely Barbie, hair shorn from too many experiments,
now loveless and forlorn;
a matchbox car, once prized, now missing
a wheel and limping along;
a Teenage Mutant Ninja Turtle doll with other refugees
from popular shows of past years;
a gingerbread boy gamepiece, knowing he belongs elsewhere,
neglecting his duties in Candyland, so compelling
is the baby in the manger.

from my chapbook, Whistling Past the Graveyard
Posted by Kristin Berkey-Abbott at 5:37 AM