Today I will turn in my last paper for my first semester of seminary.  It is written, but I want to take one last look at it.  But today, I want to write about a different class that I did for the past 6 weeks.  I joined a group organized by the artist Vonda Drees.  Together we read Crisis Contemplation:  Healing the Wounded Village by Barbara A. Holmes and did journaling, which was often in the form of sketching.  We had a once a week meeting to discuss the book and the journaling that we did.

One of my compatriots rearranged her sketches on a tabletop so that they were no longer in chronological order, and interesting patterns emerged.  My sketches are in a spiral bound book, and I don't want to destroy it.  But I think that putting the sketches here, with the quotes that inspired them, will yield some useful insights.  In past journaling groups, I wrote the quotes on the sketch, but this time I didn't.

I began by posting a picture of the markers I would use: 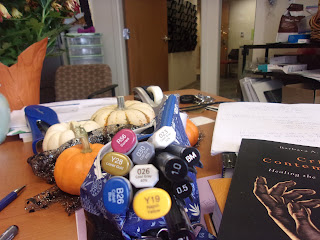 A first sketch--first I was undecided about having a blue marker, but I remembered the power of blue to create green. This morning, I added the bowl of flame shape, as I tried to see how deep an orange I could create. As I was creating the image in the bottom left, I was thinking about arrows and arrowheads, broken treaties and different directions, but I haven't started the book yet. 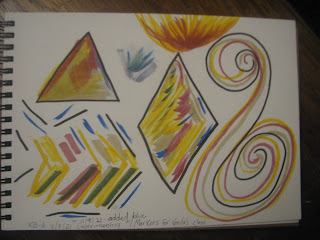 This afternoon, on p. 13 in the Preface Practices, how we came to know our family histories. For me, it wasn't in the genetics or DNA, but in the stories we tell or were told, the connection to both farms and mountains, the faith that gets seeded (or lies in fallow soil) for each generation to sprout/grow/harvest in new ways: 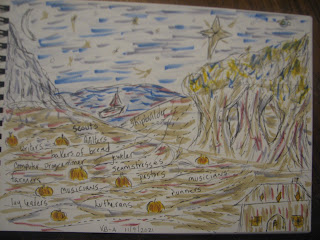 "Once the unthinkable crisis has us in its clutches, we have no choice but to let go of our false sense of control and ride the waves of destiny. On the other side of this wild ride awaits extinction, resurrection or rebirth." 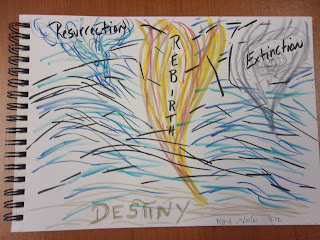 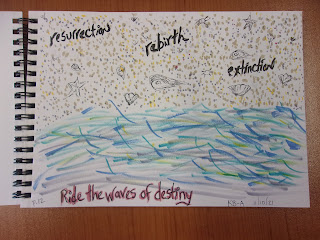 ------
I don't have a sketch to go with this quote, but here's what jumped out at me from my lunch reading; her words from the acknowledgements demanded to be written down and shared: "When I look back on a lifetime of teaching and learning, I am thankful that I earned my degrees later in life. By then, I understood my gifts and my shortcomings, my call and my communities of accountability. Although I recognize the dynamic nature of the word 'understanding,' my point is that I pursued graduate studies when it was far too late to indoctrinate me into systems thinking" (p.16).
-----
I am at a Lutheran women's retreat at a conference center by a lake in the middle of the Florida peninsula. This morning's walk brought spider web after spider web, some small, some draped across several surfaces, all spectacular. Then I read the first few pages of chapter 1 and thought about "freefall through our carefully woven safety nets of 'normalcy'" (p. 20): 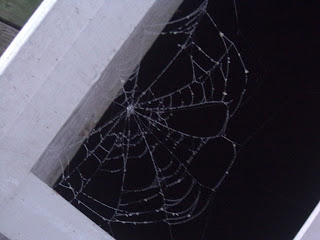 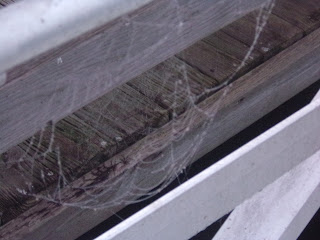 "Rather, we are reminded that human beings are a part of a community of inspirited life" (p. 27). I love the word inspirited (one picture with flash, one without): 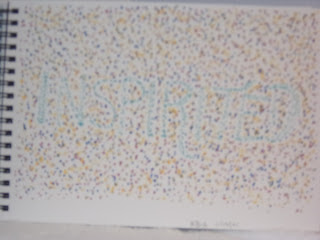 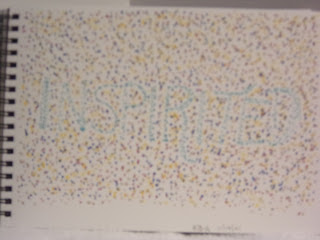 -----
"The truth of the matter is that we live on a mysterious planet, with other living beings, whose interiority and spiritual realities that are just beyond our cognitive reach.
If life, as we experience it, is a fragile crystal orb that holds our daily routines and dreams of order and stability, then sudden and catastrophic crises shatter this illusion of normalcy" (pp. 19-20).
These words, along with the ones I wrote down earlier on Saturday, about safety nets and spider webs, were ones I was thinking of as I created this sketch. I was remembering the quote mistakenly, thinking that life was held in a fragile crystal cup, an image I also like. 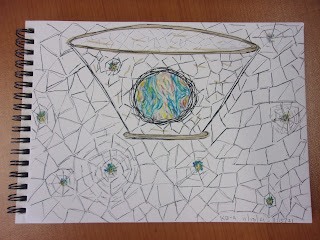 ------
I, too, was haunted by this idea:
"Slowing down is...about lingering in the places we are not used to. Seeking out new questions. Becoming accountable to more than what rests on the surface. Seeking roots. Slowing down is taking care if ghosts, hugging monsters, sharing silence, embracing the weird...the idea of slowing down is not about getting answers, it is about questioning our questions. It is about staying in the places that are haunted. " Bayo Akomolafe, p. 39
Process Note: My first idea was for a haunted house and I would put all the regrets that haunt me on the boards of the house. But I made the house too big, with no room for all the ghosts and monsters that I envisioned circling the house. And then these other aspects appeared: the woman on the side of the house, the stuff going on in the attic (not exactly sure what's going on there), the plants and pumpkins and cats and the table inside that's ready for tea. So instead of writing regrets on the house boards, I wrote parts of the passage.
I'm posting 2 versions of the same drawing, one with flash and one without. 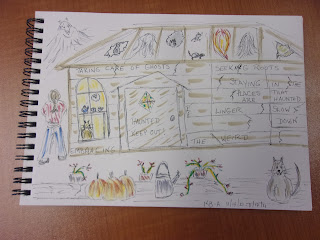 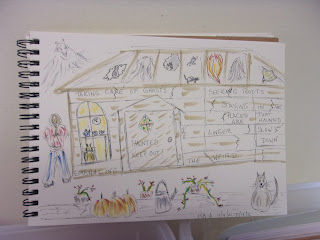 --------
I have not made much progress with my reading. But this sentence did leap out at me: "In the darkness, we can gather in Spirit and be filled by this Source" (p. 44).
It's not the sketch I saw in my mind when I started, but it has some appeal (same picture, one with flash, one without) 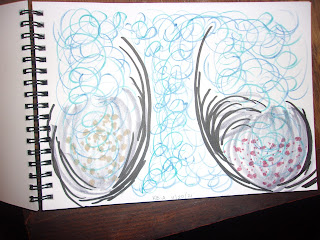 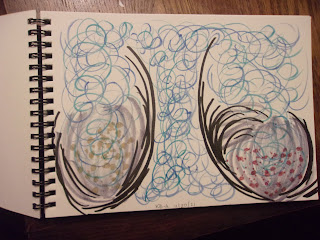 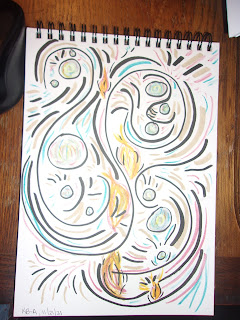 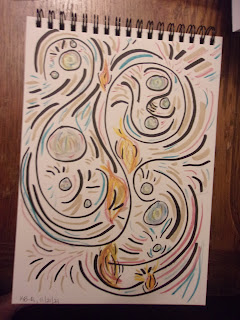 -------
I was short on sketching time and short on connectivity last week. I did work on this sketch, which is less of a response to a specific passage from the work, and more what emerged as I thought about wounds and what it takes to heal (stitching, partners on a path, a way out of no way, protection of our soft spaces): 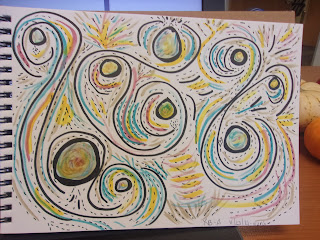 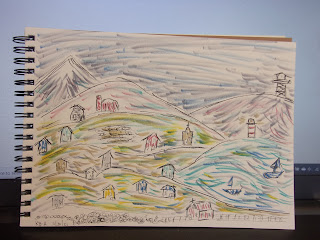 -------
Although I hadn't read any further in the book, I needed to keep my hands busy and my face neutral during a boring/aggravating meeting yesterday. So I worked on this sketch. This morning, as I read this quote, the sketch seemed to fit: "The child has recently come from the realm of the ancestors and the grandparents are on their way. There is much wisdom and special knowledge to be imparted between these generations" (p. 85).
I also see some Advent themes: unlikely wombs incubating improbable miracles, marginalized women saying yes to God's invitation. 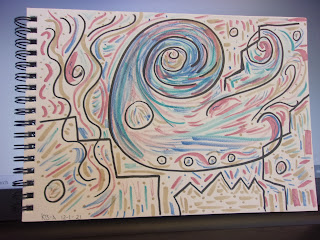 -------
I confess that I was once again sketching without having a specific response to the text in mind. Today, as I looked at the sketch and text, this sentence jumped out at me: "Art opens a portal to new realities" (p. 98). 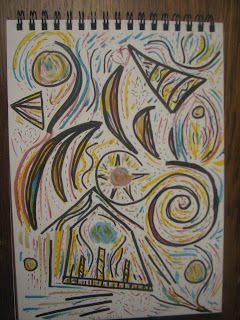 ------
I created this one as I was thinking about lament. Before I started filling in the circles with color, my thought was that each circle would represent a lament. I also had in mind a tear (as in the drops one cries, not a torn spot) to the right of the page. The sketch went in different directions than I planned, but I still think it's an interesting response to the idea of lament. 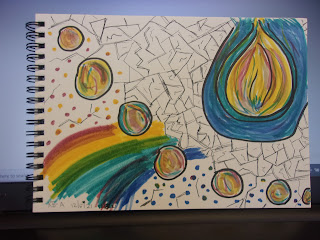 ---
"Although relief seems to be an impossibility, we know that we are embedded in a quantum world with nothing but possibility" (p.118).
"A liminal space is the time between the 'what was' and the 'next.' It is a place of transition, a season of waiting, and not knowing. Liminal space is where all transformation takes place, if we learn to wait and let it form us" (Jon DeWaal and Shonnie Scott quoted on page 128). 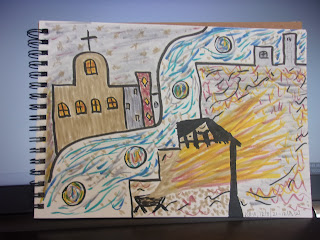 -----
"What is called for in times like these is a deep dive into unknowing, a trusting, and a liminal float in spiritual depths that sustain our collective wellbeing" (p. 129). 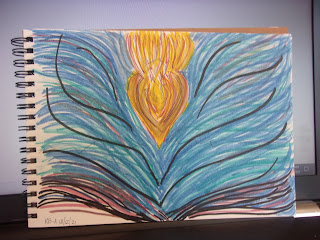 ------
"We leap, trusting the glory of ancestral guidance, the blessed hope of the dawning of a new world order, and the promises of God" (p. 137).
The leaping didn't turn out the way I envisioned it, but I offer this sketch because the quote really speaks to me--what a way to close the book! 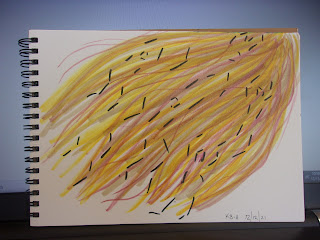 Posted by Kristin Berkey-Abbott at 5:47 AM