I began the week-end by watching the governor's press conference.  I turned it off when the governor said, "Well, you know, I don't really like telling people what to do.  And that goes for agencies too."

Excuse me, but you're the governor.  Isn't that your job?

Happily, there are plenty of other governors who will lead.  And our local officials have been out ahead of our state governor and the U.S. president for weeks now.

On Saturday, I watched Contagion.  I don't remember watching it when it came out--if it had made an impression on me, I likely would have blogged about it, and I didn't.  When I watched it, I thought it was a bit overblown.  The disease traveled so quickly, and society broke down so quickly.  Now it looks more like a chilling prediction.

I also watched part of The Day After, another movie that made me fill a chill at the early part.  I wrote this Facebook post:  I am watching "The Day After"--the first part of the film, where life is normal, and we know that a giant, nuclear, mushroom cloud of change is on the way, and I want to just weep for days.

On Sunday, we went to church because we're part of the skeleton crew doing the live streaming (see this post on my theology blog for more details).  On the way home, we drove by Memorial Hospital on Johnson Street, which is usually a sleepy neighborhood hospital on a Sunday morning in Hollywood, FL. At each entrance: a containment area with separate ventilation. It looks like they'll be doing intake there. Smart in terms of containing infectious contagion. Scary in terms of what they expect is coming.

We had a Sunday afternoon and evening that was partly typical and partly strange.  I sent my Sunday e-mail to my online students to tell them what's due this week, but I also let them know that if they needed flexibility, they only needed to reach out to me to let me know.  I did some reading and some sketching.

I'm starting a new online journaling class, so I did my first sketch.  The quote is from the first paragraph of Cynthia Bourgeault's Mystical Hope: 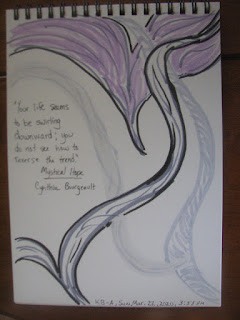 My spouse played violin while I read: 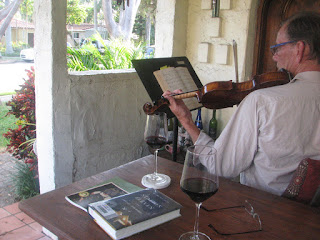 But take a look at what I'm reading: 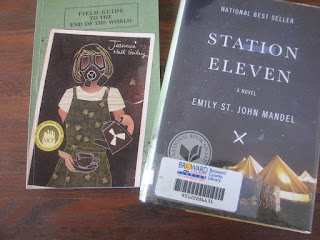 In some ways, it's standard reading for me.  But I had already read Station Eleven when it first came out.  In the past week, I've felt an increasingly desperate desire to visit it again.  On Thursday when I found out that public libraries would be closing indefinitely, I zipped over to the nearest branch that had a copy--luckily that branch was near my work.

Along the way of my week-end, I had lots of conversations with lots of family and friends:  by phone, by e-mail, by Facebook.  Much of the conversation revolved around the current COVID-19 crisis.  But much of it was reminding each other of how long we'd been preparing for and surviving various crises.

I am one of the few academics that I know who isn't working from home this week, so my week-end had both a normal feel (getting ready for the work week) along with the surreal aspects.  I don't know how much longer I'll be able to say any part of that sentence.

Now it's off to a different campus to be trained in our school's new and improved LMS for online learning.  I'm teaching 2 classes in the online division, the first that I've taught in our online division since 2016.
Posted by Kristin Berkey-Abbott at 7:59 AM

Best wishes with all you are doing for work and church! You might also want to see Outbreak, with Dustin Hoffman. Or not!

You are doing good things by teaching.

Deliciously sweet ! Did you consider a marketing plan for the book ? To gather initial reviews, try usabookreviewers.com . If I can interest you in a book trailer, let me know. I can do 1 for free !