A Walk Beside the Woods--with a Camera

My church's pastor has been taking amazing photos for years now.  Recently, he started pairing those photos with Bible verses; go here to see what I'm talking about--scroll down to see a full sample.

A few weeks ago, he sent out an invitation to some church members to go with him to a nature preserve in the county above ours to take pictures.  It was a Monday, and I probably could have made a lot of rearrangements to miss work--but because it was a bit of a last-minute possibility, I decided not to go.

It was a successful outing, so he arranged another outing, this time to the Everglades on May 23 (yesterday).  This time, I had more lead time, so I decided to go ahead and take the day off and go.

Some people might wonder why I wanted to take a leave day and use it this way.  Well, there are several reasons.  My unused leave time vanishes at the end of the year, so at some point, I need to start using it.  I can't save it all off and take off an entire month at a time, either, so usually, I have some days that I need to use here and there.

A trip to a nature preserve sounded wonderful to me.  I spend too much time in human-made structures.  Plus, I knew this would be a last chance of sorts, to go to the Everglades to take photos for several months.  It's getting hotter and buggier by the day.  Even yesterday was a bit buggy, but we're at the point that bug spray repels them.  Later in the summer, it won't be that way.

Some might have asked why not take this coming Friday off, so as to have a 4 day week-end.  I prefer a Monday off--the week is shorter that way.  So now I will have had 2 Mondays off in a row.  Plus, the trip to the Everglades was yesterday, not Friday.

I was also interested in seeing everyone's artistic process up close.  I know how I take pictures.  But I've never been in a group taking pictures.

We headed to the Everglades, to the Loop Road in the Big Cypress Nature Preserve.  We stopped along the way to take pictures and/or enjoy the natural world. 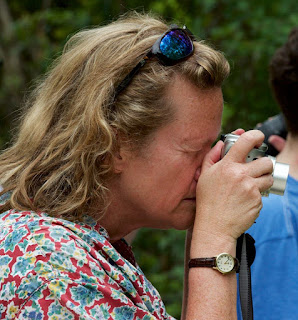 You might imagine a church group stopping to pray or handle snakes or something like that.  Nope.  We're Lutherans.  If we prayed, we did it silently.

Here's what I learned:

--I tend to take a few pictures and assume I'm done.  Because I was with a group, I stood staring more than I would have on my own.  I appreciated the browns and greens. 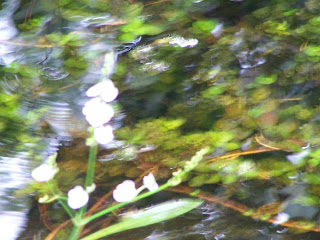 The image above is blurry, but I like it anyway.  We got home with lots of pictures that look like Impressionist paintings.

--We didn't see much wildlife.  We were too big a group.  Plus, it was late in the season for birdwatching.  We did see more alligators in one day than I've ever seen.  Plus a group of them: 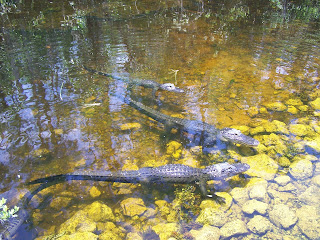 --I don't tend to let things in nature be themselves.  For example, I saw the below, and I said, "That looks like a statue.  Or an angel who has lost her wings.  Look at the red and green plants above--don't they look like wings?" 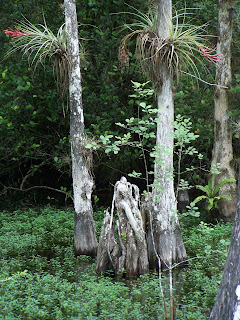 --Here's a close up of a wood knob, where I saw a face that I didn't see when I was staring at it from the creekside.  It's interesting to get home and see what I didn't realize I was seeing through the camera lens: 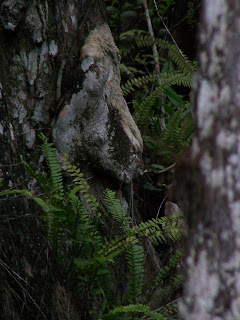 --On the way back, my pastor talked about his journey through camera equipment.  He mentioned some prices--yikes! And I thought my new markers were expensive.

The day turned out to be a bit longer than I expected.  We didn't get home until almost 4.  But it was worth it. I felt restored and refreshed--and looking forward to more art inspired by the trip.
Posted by Kristin Berkey-Abbott at 6:39 AM