Of Side Dishes and Shreds and Songs

After my dentist appointment on Thursday, I went to the grocery store while my spouse went in for his cleaning.  On impulse, I bought a frozen medley, a side dish that was supposed to have a mix of protein (small beans), veggies, and a sauce.

The side dish wasn't bad, but it certainly wasn't good.   Our blah dinner could have plunged me into sadness, but unlike Thursday night, when sadness came over me suddenly, we had a good Friday evening on the porch.  We caught up with each other, ate dinner, cleaned up, and eventually, my spouse played his violin, and I sketched. 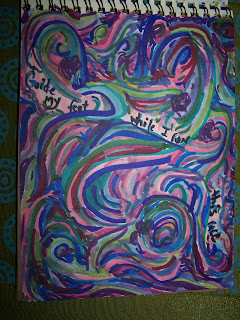 Towards the end of the practice time, he played "Oh, Mary, Don't You Weep."  I could sing every verse, and I thought, how do I know this song?

Long ago, I had a cassette tape of a group called HARP, composed of Holly Near, Arlo Guthrie, Ronnie Gilbert, and Pete Seeger.  During my first year of grad school, that tape played regularly in my car stereo.  Last night, I wondered if I could get a copy of it on CD, since the tape has long ago gone to cassette heaven.

Not only could I get the original 8 songs, but there's a CD that has other songs from the recording session.  So I bought it, and it's on the way.  It was a splurge, but I had an Amazon gift card from Teacher Appreciation Day.

We live in a time where it seems that everything ever made is available on the Internet, but that's not true.  I remember when I thought I would replace all my LPs with CDs, and I was surprised to realize how much of my collection was not being digitized.

Part of my purchase was impulse buy--but part of it was being surprised that the CD even existed--and wanting to own it while I still could.

This morning I am getting ready for a group of people to come over for lunch and swimming and Vacation Bible School planning--and maybe a bit of rehearsing, as some of them will be playing tomorrow.  If they rehearse, I'll sketch.

I will likely make a batch of brownies.  On Thursday before spin class, we talked about how our dietary habits have changed.  I once went through a bag or two of sugar (5-10 pounds a week) a month--that's how much I baked and how much sugar I used in my iced tea, back when I drank several gallons a week.

On Monday, I'm starting a 10 day "shred":  no dairy, no alcohol, just veggies, lean protein, and fruits. For months now I've been trying to cut back on my dairy, with no luck.  Now I'll try eliminating.

Thus, the brownies today:  a last hurrah.  But for only 10 days, which is only 1/3 of a month, after all.  I'm mainly doing it because one of my spin class instructors at the gym is doing it, and I will have accountability that way.  I was surprised at how effective it was for me to have a weekly check-in during the Weight Loss Challenge of 2011, and I'm hoping similar forces will be at work.

Here's what I really want to accomplish:  I want to be able to drink my coffee black.  I'm hoping that 10 days of doing that will force a transformation--ah yes, I recognize that siren song.

Hopefully it's not a swan song.
Posted by Kristin Berkey-Abbott at 7:39 AM