In later years, will I/we wonder about the things I didn't record as the week progressed?  Will there be moments that we later recognize as hinge moments yet unrecorded here?

Probably.  Let me write about some of the possibilities:

--As I drove to my appointment with my spiritual director, I listened to a bit of Trump's press conference.  I wondered if we will look back and wonder why we picked a fight with China--or will we wonder why we waited so long?  Will we go to war over Hong Kong?  Will the global economy unravel even faster?

--This was a week of many racial outrages, the most egregious the police killing of George Floyd in Minneapolis.  I made a book spine poem, a puny response, but it's mine: 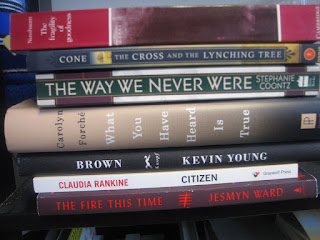 --This week, we hit a different grim milestone:  100,000 dead in the U.S. of COVID-19.  It's a number that's hard for me to get my head around, so earlier this week I looked up #s of deaths in past wars.  The number that we heard this week is that we now have more COVID-19 dead than in all the wars since Korea.  Daily we lose the number of U.S. citizens that we did on September 11, 2001.

--As I think about my personal circumstances, I think about the meeting I had with the new owners who have just bought the school that employs me.  Having been part of a school that was an acquisition before, I feel I have seen this movie already.  But the Art Institutes and the rest of the EDMC schools were bought by Goldman Sachs, an investment firm that had no interest in education.  I do feel good that we've been bought by people who own a similar school in Brooklyn.  But it is clear that they will be making some major changes.

--In this week of deaths of all sorts, I was sobered by the loss of AIDS activist Larry Kramer, especially since I had just seen archival footage of him in How to Survive a Plague, footage that reminded me of how powerful and effective (and irritating) he was.  But Robb Forman Dew also died.  This obituary in The Washington Post noted that she emerged at the same time as Louise Erdrich and Ann Tyler, and that's how I remember her, as part of a group of important women writers who came a generation before me.  Barbara Sher also died this week--in the mid-90's, I read all her books, and I particularly remember Wishcraft as the type of book that told us to train our brains to think about what we wanted to achieve, not on our fears.

--Yesterday, my spiritual director and I talked about the future of the church, once churches are assembling in person again.  When churches can reassemble in person, it would be good to still do the remote elements, as we have many people who can't gather in person:  the sick, the elderly, the disabled.  But when pastors have to lead in-person worship and visit the shut ins and lead Bible studies, will they have time to do the virtual stuff?  I suspect they won't.

I said, "I wonder if there might be a job as Director of Remote Programming."  We talked a bit about what that would look like.  My spiritual director said, "Your face really lights up when you talk about this."

Of course, it's similar to my dreams of being an online retreat coordinator.  It's so hard to plan for the future, or even to think about the future, when so much remains unknown.  I'm hoping that the seeds that will bloom into an appealing future have been planted in this time of so much death.  I'm trying not to give too much time to my apocalyptic fears.
Posted by Kristin Berkey-Abbott at 10:37 AM

Thank you for introducing me to 2 women I didn't know - Dew and Sher. Best wishes, L.