So Normal, So Not

It is a rainy Sunday morning, but not the flooding kind of rain.  I woke up thinking, is that rain hitting the windows or the tiny feet of a creature in the attic?  Hoorah!  It was rain.

I spent much of yesterday looking for rain, as threatening clouds came and went and then settled in for the evening.  It was sunny early in the day, and we had a great time outside, reading by the pool and then getting in the pool.  I hadn't gone on my walk, so I spent 45 minutes swimming back and forth.

And then, fighter jets appeared out of nowhere, out of the south, flying north.  My first thought:  I hope they're ours.  My old habits kicked in:  listening for explosions, keeping an eye open for a mushroom cloud, wondering if I should go inside to be safe from blast burns or the stuff exploding away from a blast site.

None of that happened, and come to find out, it was an Air Force squadron flying over to say thank you to various hospital workers.  I still find it a curious way to say thank you.

Yesterday felt so normal in some ways:  enjoying the warm but not blisteringly hot day by relaxing in the pool.  And yet, those fighter jets reminded me that it's anything but normal times.  I've lived in South Florida since 1998, and yesterday was the first time fighter jets flew over my house.

On Friday evening, I went grocery shopping.  Again, it seemed like normal times--except for the complete lack of toilet paper.  Happily, I found some toilet paper a few weeks ago, so we're probably set through the summer.  But still, it's strange.

After my spouse was done with his Philosophy class at 9:45 on Friday night, we sat on the front porch to enjoy a glass of wine.  We were almost done, when my spouse said, "Kris, there's a fox."  I saw something by the tires of a car parked at the curb; I wouldn't have noticed if he hadn't pointed it out.

The creature moved out of the shadows and made its way down the street.  My spouse is convinced we saw a coyote.  I'm still leaning towards fox.  In any case, it wasn't a cat or a dog--the tail was very bushy unlike most cats, the body was more like a cat than a dog, and the pointy face made us think of other creatures.

"Online teaching until 9:50 pm last night, then out to the front porch for a glass of wine.

That is when Kristin Berkey-Abbott and I noticed wildlife taking a clue from recent human behavior. That's right, even the neighborhood coyote doesn't use the sidewalk anymore."

It seems to me that the post would make a great writing prompt of some kind.

Speaking of writing prompts, I've been having fun watching others make poems out of the spines of books, so on Friday, I decided to try.  Here are two versions: 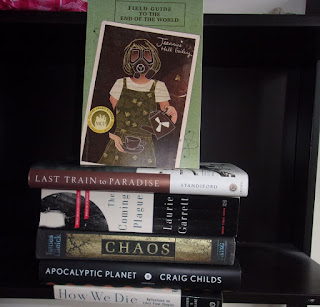 Because the title on Jeannine Hall Gailey's book was hard to read lying flat, I decided to use a slightly different approach. And although the version with the palm tree in the background isn't quite as good in terms of photography (so hard to get a picture without shininess using my cheap camera), I'm including it here anyway. 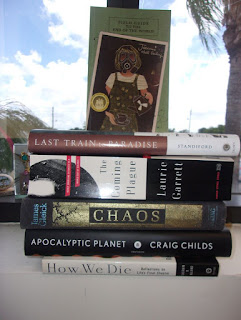 Posted by Kristin Berkey-Abbott at 8:15 AM