Because my school was bought by Orthodox Jews, we had Monday and Tuesday off for Shavuot, which was just fine with me.  It was a strange, short week.  I arrived on Wednesday to find a pile of signs we won't be using, the temperature check signs, the social distancing signs, along with the thermometers and the wristbands that show that people have checked in: 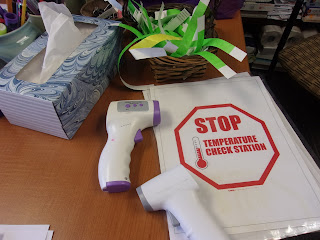 It was almost a year ago that we first started doing these things.  Honestly, I thought we'd be doing them a bit longer, although for about the last 6 months, it's begun to seem more like pandemic theatre:  our students know how to answer the intake questions, and the thermometers have never registered a fever.

It's been strange to be on campus in the mornings and not be taking temperatures of everyone who arrives.  I had gotten used to it as a way to greet people.  I know that I can still greet them, of course.  I also laugh at myself, because I remember a weeping moment in the late summer of 2020 when I said, "I'm just so tired of taking temperatures."

And now, it's strange to retire that equipment.

On Thursday our internet went out, and I called the new IT people who asked me to go to the server room to tell them if I saw any lights blinking that shouldn't be blinking.  When I told them that no one on this campus was ever allowed to have the code, I could tell they were just dumbfounded.  Within a few hours, the campus had internet restored, and I had the code to the server room (those 2 events are not causally related).  I made this Facebook post:

"Because we have a new IT director, I have been given the code to the server room, a code which previously, no one but the few IT folks were allowed to have (much to the fire inspector's puzzlement). I have used the code to go into the server room. I expected to find a great treasure. I found old equipment, including an ancient fax machine."
On another campus, my former colleagues who have already been transferred have been sorting through the Christmas decoration storage rooms--yes rooms.  One colleague told me that they had found a combination DVD and VCR player.  I said, "You might want to hang onto that."
It's hard for me to imagine that we'll need those thermometers again, but of course, we'll hang onto them.  I've seen the inside of the server room.  I know we're hanging onto all sorts of things, just in case we need them again.
Posted by Kristin Berkey-Abbott at 7:54 AM