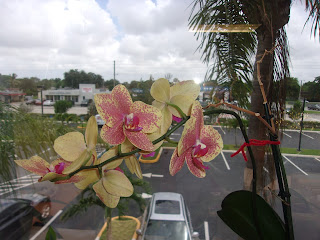 They had heard me talking the day before on the phone, when my parents called to wish me a happy birthday.  I hadn't let my work colleagues know it was my birthday, because I didn't want anyone to feel like they had to do anything special for me.

That orchid was in full bloom then, and it has never been without flowers in the year that follows.  I don't know much about orchids, but I do know that's unusual, for orchids or for any plant. 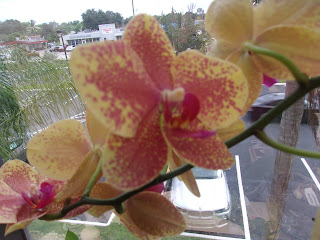 Is it something I'm doing?  I give it some water or some cold tea (when the tea in my mug cools) once or twice a week, and that's it:  no special fertilizer, no orchid food, no compost.

I have never thought of myself as having a green thumb--in fact, just the opposite.  But perhaps it's time that I change that narrative.  A few months ago, I noticed some almost dead plants on a windowsill that had been abandoned during one of the layoffs in the fall.  I brought them to my office and gave them some water or cold tea once a week.  Now they are flourishing: 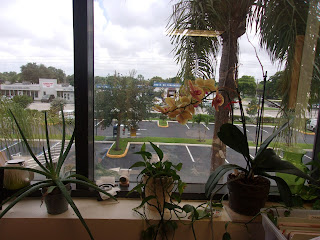 I wish I had some before pictures.  Imagine this aloe plant, but about 2/3 less length on the spines. 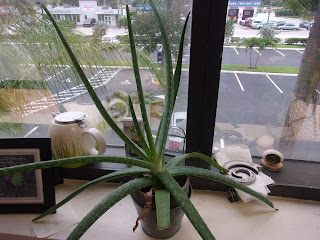 This plant once had more brown leaves than green.  I trimmed them off, and look at how it's thriving: 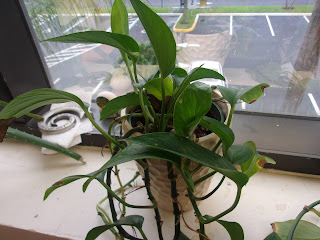 Yes, I see the life lessons here--trimming back to facilitate growth, a small bit of care goes a long way, on and on I could go.

But I also see it as an important reminder about the stories we tell ourselves about ourselves.  For years, when people asked me if I had pets or children, I would joke, "Oh please, I can't even keep a houseplant alive."

But it turns out, I have a green thumb, or at least a greenish thumb.  I've met people with amazing abilities to nourish plants and grow things out of the most non-nourishing soil.  I'm not sure that my skills are up to that level.

But I'm not sure that they aren't--both in terms of plants and in terms of many other possibilities.

Posted by Kristin Berkey-Abbott at 4:00 AM