Snapshots from a Week

I've got a collection of odds and ends and scraps--they might make an interesting collage, even if they don't make a full-size quilt.
--This morning, I wrote this Facebook post:  "Lightning to the east, full moon to the west, the honking of tree frogs the only sound: the benefits to being an early riser."  It reminded me of a few weeks ago when the lightning was much more spectacular, not just pulses of light, but jagged bolts of lightning and towering clouds that I could only see as the lightning bounced back and forth.
--What I will remember most about this week:  I have felt a relaxation about the seminary process, the kind of relaxation that made me realize how stressed about the Candidacy Committee I had been without realizing it.  I thought I was stressed about the possibility of the technology failing, but it wasn't just that.  I have heard so many stories of Candidacy Committees who say no or put up lots of obstacles, so it's no wonder I was feeling a bit stressed, even as I thought that they would approve me.
--I want to remember the joy of getting my books for my Fall 2021 seminary classes, at least the ones I don't already own.  I'm happy that they show diversity and open mindedness and intellectual (but not inaccessible) rigor.  Will I still feel happy about these books in early November?  I hope so.
--I want to remember the Cuban flags I've seen, the message made of small balls pushed into a highway chain link fence overpass that said, "Free Cuba."  It's strange to hear news of Cuba and protests here, but the national news has so little of that sort of news.
--I will also remember this as a week of doing some long overdue sorting:  photo albums and boxes of memorabilia and boxes of rough drafts.  Now on to the packing!
--The sunrises this week have not had their usual beauty.  I wrote this Facebook post:  "Even a beige sunrise has its bronzed charm."
--On Thursday night, we watched Footloose.  I thought we would only watch a bit of it, but I found it oddly compelling.  I say oddly, because I've seen it oodles of times before.  At one point, I turned to my spouse and said, "All of these characters have such big, unresolved father issues."  Even the preacher has father issues--with God as father.  And this time, I saw the whole movie as game after game of chicken--who will blink first?  Who will back off?
--We live in such an age of good viewing, and all I want to do is watch the shows of my youth.  I feel similarly about music.  It's all just too overwhelming.
--And now, onward--there's sorting to do.  What covers will I untreasure today?  Here's one from last week: 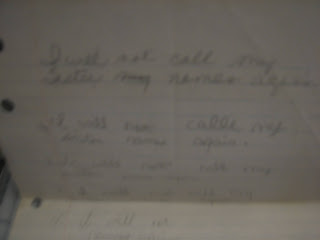 What names did I call my sister?  It's lost to time--I don't remember my parents using this punishment often.  May we go to another concert again soon: 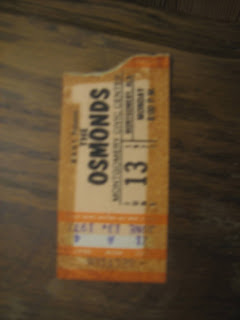 Posted by Kristin Berkey-Abbott at 7:41 AM