The Feast Day of Saint Anne

Today is the feast day of Saint Anne, although in the Eastern Orthodox church, her feast day was yesterday. I'm somewhat amazed to realize that I haven't written about this feast day before I came across it last year.

Saint Anne was the mother of the Virgin Mary, which means she was the grandmother of Jesus. She's not mentioned in the canonical Bible. The apocryphal Gospel of James mentions her. I haven't read that text, but I am sure that the details I want to know are not there--what did daily life look like? How did Mary and Anne get along? What did Anne think of Jesus?

As I was researching her this morning, I came across this image from a 15th century Book of Hours, and it's quickly become my favorite: 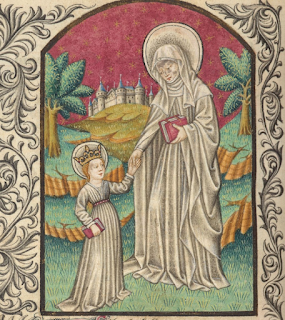 I love that both Saint Anne and Mary have books in their hands. According to many traditions, Saint Anne taught Mary to read, and she's often seen doing this. As I look at those images, I wonder if the artists realized what a subversive image it is: a woman teaching a girl to read.

Anne is sometimes depicted in scenes of Jesus as a baby, but so far, we have no image of her at the cross. I suspect that's because so many of this artwork comes from centuries ago, when it would have been very unusual for grandparents to survive to see their grandchildren in adulthood. Plus, one tradition around Saint Anne has her having Mary when she's very old--another story of the impossible coming out of improbable wombs!

So today, let us celebrate all the miracles which seem so impossible. Let us ask Saint Anne for protection, the way that Martin Luther did in the thunderstorm that terrified him. Let us know that all for which we yearn may yet be delivered to us.
Posted by Kristin Berkey-Abbott at 7:10 AM

I really like your blog--and its spiritual tone. I'd like to add this site to my blogroll.