Quilts and Bears and Progress

Yesterday was full of amazing events, but they break down along two lines:  the work done on my quilt and a bear sighting.  The political news came late, and I'll let others dissect the meaning of the election results.  Let me focus on a smaller canvas.

It's not surprising that if I sit in a chair and work on a project for 12 hours straight, I'll make progress.  It's something that Quilt Camp has taught me in the past. 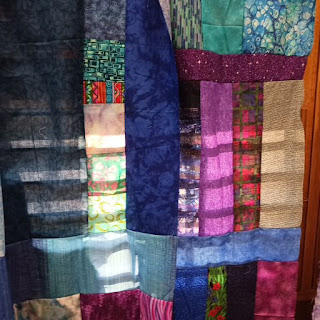 But I didn't expect to end Quilt Camp with the top of my quilt assembled. 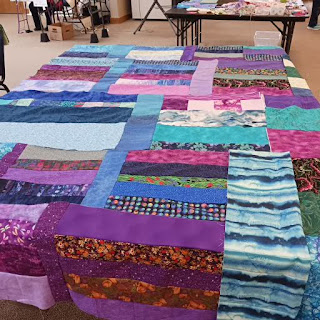 I had come to Quilt Camp with many panels already assembled.  I started sewing them together and planning for more.  When I left Quilt Camp in April, I didn't have nearly enough, and I assumed that not much had changed.

In fact, I still can't figure out how the situation changed.  Several folks yesterday encouraged me to use the extra tables to lay out what I already had, and I was interested too, so late in the morning, I did.  I haven't made that many more panels since April, so how did I have enough--more than enough--yesterday?

However it came to be, it was clear that it was time to quit stitching new panels--and that if I could get the top sewn together yesterday, it would be easy to leave Quilt Camp with the whole thing assembled--top, batting, and back, pinned together, ready for quilting.  This morning, that's looking probable.

I thought about sewing deep into the night, but we do have time this morning, so I decided to quit while I still had feeling in my fingers.  I walked down the dark road to our little house in the mountains.  I watched the wind blowing and felt a bit fretful about the saturated ground and the swaying trees.  I worried about trees falling down.

And then when I was almost home, I saw the bear.  He looked at me, and I backed away. He was at my driveway, so I kept walking down the hill away from my house. I turned back to my house, he gave me one last look, and then he ambled up the hill across the street. I remembered Pastor Sarah's advice during our Lutheridge welcome meeting: "If you see a bear, just sing." I started singing the song we created during our time together at quilt camp: "Inch by inch, row by row, gonna make this quilt square grow." I did think about trying to get a picture, but I didn't want to risk the flash making the bear mad.

I don't think I was in danger, but the bear did stare at me longer than I expected.  Was he evaluating whether or not I was a risk to him?  Was he hoping I had honey?  No, that's Winnie the Pooh.  Was he expecting me to run away?

In any case, it felt good to be inside, once I was in the house.

I just got a message that the Faith Center is open--so let me go and get my project closer to completion.

Posted by Kristin Berkey-Abbott at 7:17 AM