Several people have asked me about the recipes I used for my bread baking that resulted in this picture: 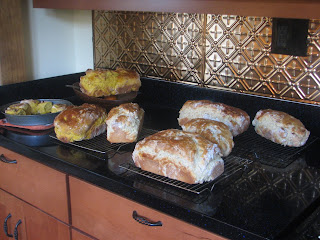 The cinnamon rolls are made from this Smitten Kitchen recipe for Pumpkin Cinnamon Rolls.  I always double the recipe, make 1 pan of cinnamon rolls, and shape the rest into 2 loaves of bread.  So in the picture above, the loaves of bread to the left are more yellow in color because they have pumpkin in them.

Combine the above in a large bowl and let proof while you assemble the oatmeal mixture.

You could also add ground flax seeds or wheat germ or other ground seeds.

Mix the above in a pot or a microwavable bowl.  Heat to a boil and let cool.

Return to the big bowl.  Add 2-3 eggs and beat everything together, with 1 T. salt.  Add 1 cup of sourdough starter.  Add the oatmeal mixture, mix everything together, and start adding flour.  You will probably need at least 10 cups, and you may need significantly more.  You can use white flour or wheat flour, along with any other flour.  Add and then knead until a smooth dough forms.

Bake at 375 for 35-45 minutes.  Let cool at least 20 minutes before cutting into the loaves.  This bread freezes beautifully, if your household doesn't gobble it all up right away.

Posted by Kristin Berkey-Abbott at 7:32 AM

Email ThisBlogThis!Share to TwitterShare to FacebookShare to Pinterest
Labels: cooking