Lutheran Women's Retreat in Year 2 of a Pandemic

I'm at a WELCA retreat, the first time we've gathered in person since the last retreat I was at, here at the Lake Yale retreat and conference center, back in 2019.  I came here for a number of reasons, but mainly because I'm increasingly feeling disconnected from so many people, and a long car ride to a week-end retreat seemed like it would be a good way to begin rebuilding connections.

Back then, I remember that I had decided that I would pursue a certificate in spiritual direction, not seminary.  And now, I am about to finish that certificate, and back in August, I began a seminary program.  Last night, the assistant to the Bishop brought greetings from the him, and she asked for a show of hands how many seminarians we had in the room.  I was so happy to thrust my hand in the air.

The room was not as full as it was 2 years ago, but I expected that.  I was relieved, actually.  I wanted to be able to spread out, since the chairs were set up side by side as if we don't have a global pandemic raging across the planet.  I didn't wear a mask, since I was able to sit far away from everyone.

I will probably not go to any of the workshops.  To be honest, the topics don't call to me this year.  But I'm also worried about how many people will be in the room with me for over an hour, likely unmasked.  This year, unlike 2 years ago, I have my laptop with me and plenty of seminary work to do.  That will be how I will be spending much of my time.

I wondered how the food service might be different, but so far, it seems the same as it was 2 years ago, a cafeteria type serving line.  Last night, unlike 2 years ago, we only had one main dish offering, but that's fine with me.  There's always a huge salad bar and a choice of soup, if the main dish wasn't acceptable.  Last night, it was ricotta stuffed shells, a perfectly fine choice for me.  The cups are disposable, which I find an odd choice, as the plates, bowls, and silverware get washed.

I went for a quick walk this morning to try to catch the sunrise.  It was surprisingly misty/foggy. 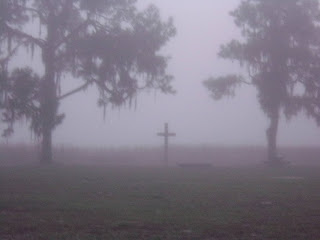 I heard booming sounds.  It's strange to be a place where the sounds of gunfire are humans hunting wildlife, not humans hunting each other.  I do feel safe, although there was a strange minute where I was at the shore of the lake, with the gunshots getting closer. 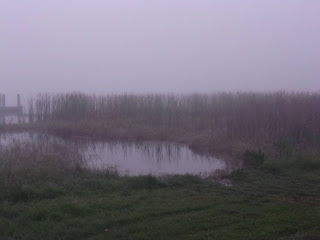 The outside of the buildings is still the same, and likely to ever be so.  Two years ago, I described the aesthetic as cinderblock, metal, and sand.  But the place has a remodeling effort underway, and I'm in one of the remodeled rooms.  In fact, it's so recently remodeled that I wonder if they forgot to bring back some of the furniture.  I'm in a one of the more accessible rooms, so maybe the lack of a chair or any place to sit except the bed, maybe that's intentional.  So I went and got a chair from somewhere else.  It's not the most comfortable, but it will do.  The mattress is phenomenal, and that's what's most important to me.

Let me see what the day will bring.  The sunrise this morning was certainly different from two years ago.  Here's a picture from an hour later than those above: 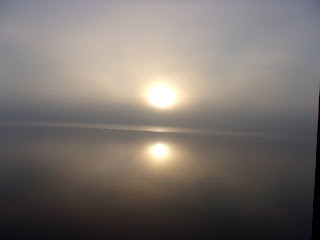 It's very otherworldly, which is a good adjective for how I feel today.

Posted by Kristin Berkey-Abbott at 8:16 AM